An Earth-sized planet has been discovered circling a star in the system, just 4.4 light-years away. The planet’s mass is similar to Earth’s, but its orbit is not. Tucked in close to its star — one-twenty-fifth the distance between Earth and the sun — the planet is likely a roasted world incapable of hosting life.

Still, the discovery, reported October 18 in Nature, ignites dreams of sending a spacecraft to Alpha Centauri, a perennially favored interstellar target because of its location in Earth’s celestial backyard.

“A rocky planet around Alpha Centauri, our nearest neighbor — this is incredible,” says astronomer Debra Fischer of Yale University. “If you were going to send a spacecraft anywhere, or a probe anywhere, that’s where you’d go first. And if you have evidence that there are rocky planets there, you’d be insane to skip that target.”

The rocky planet circles Alpha Centauri B, a star just a bit smaller and cooler than the sun. But with a year there lasting just 3.236 days, the planet is not Earth’s twin. Being snuggled so close to the star means the planet has a surface temperature of around 1,200 degrees Celsius, notes astronomer Greg Laughlin of the University of California, Santa Cruz. “It’s utterly uninhabitable, utterly scorched, utterly un-Earthlike in every respect,” he says.

But a rocky planet so close to Alpha Centauri B suggests there could be more planets in the same system — perhaps rocky and a bit farther out, in the area where life could comfortably thrive. “I think that the odds that there’s an interesting planet, a truly interesting planet in the system, are very high, given that this one is there,” Laughlin says. Data returned from NASA’s Kepler spacecraft — which looks for planets around a population of stars that mostly lie more than 600 light-years away — suggest that multiple-planet systems are common, especially when small, rocky planets are found in close orbits.

Previous observations indicate that there are no planets more massive than Neptune hovering around any of Alpha Centauri’s three stars. But those observations don’t rule out smaller, harder-to-detect planets.

“The way we describe it is, the easy planets were all found a long time ago,” says Sara Seager, an astrophysicist at MIT.

Led by a team at the University of Geneva, astronomers detected this planet using HARPS, the High Accuracy Radial Velocity Planet Searcher. They weren’t surprised to find it.

“We know now that these planets are everywhere. The question is, how big, how far from the star? That’s what we are trying to characterize,” says astronomer and study coauthor Stephane Udry of the University of Geneva. “That will help us understand how they form.”

Installed on the 3.6-meter telescope at the European Southern Observatory in La Silla, Chile, HARPS looks for stars being gravitationally tugged by orbiting planets. Because this planet is so small, its gentle tugs pull only very slightly on Alpha Centauri B, shifting the star’s position by about 50 centi­meters each second. So finding the planet’s signature in the star’s wobbles meant the team needed to carefully filter out other sources of stellar variability such as starspots, bulges on the star’s surface and gravitational interactions with Alpha Centauri A.

“It’s a tough detection, there’s absolutely no question about it,” Fischer says. “A detection that’s as technically difficult as this one requires confirmation.”

Fischer is planning on conducting follow-up observations with her own instrument, called CHIRON, which looks for stellar wobbles in a slightly different way. There’s also a chance — at least 10 but perhaps as high as 25 percent, Laughlin says — that the planet passes between Alpha Centauri B and Earth. If so, astronomers could watch for dips in starlight produced as the planet crosses the line of sight between Alpha Centauri B and Earth.

That’s the same method the Kepler spacecraft uses to find planets — but Kepler isn’t pointed anywhere near Alpha Centauri, so it can’t do the job. Another orbiting telescope, Canada’s MOST microsatellite, might be able to detect the planet’s dark fingerprint and determine its radius, allowing scientists to calculate its density and probable ingredients.

Though the planet isn’t a true Earth analog, it pegs Alpha Centauri as a legitimate destination for a spacefaring probe to an extrasolar world — albeit one on the fringes of practicality. Even a cell phone–sized space probe accelerated to 10 percent the speed of light would be in transit for 40 years. It would also have to be capable of managing extreme temperature variations, remaining functional for decades, communicating with Earth from light-years away and orbiting a small planet close to its sun without becoming a stellar snack.

So if scientists could send a probe to spy on the planet nearby, what would they do? Take photos. “You could imagine just zooming by and snapping a picture. Like Voyager,” Seager says. Study the planet’s atmosphere — if it has one — and its innards. Try to drop probes onto it — probes that wouldn’t melt. Or, if the planet is locked in orbit with one side always facing the star, “you could land on the dark side, where it would be a lot cooler,” Seager says. “It opens up our imaginations, trying to think of how we’re going to get there.”

Backstory | Half the fun 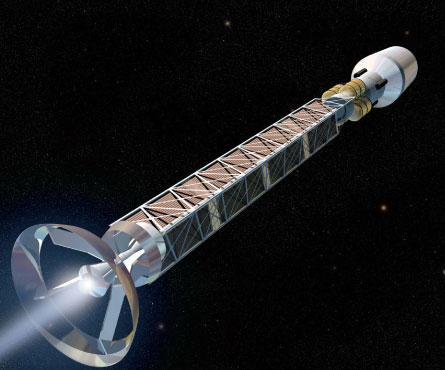 An antimatter-propelled interstellar rocket, as envisioned by NASA. Credit: NASA

With current technologies, even Mars takes eight months to reach. But Les Johnson of the Advanced Concepts Office at NASA’s Marshall Space Flight Center in Huntsville, Ala., says there are several potential future technologies that could propel a spacecraft to Alpha Centauri within centuries. Among the possibilities: