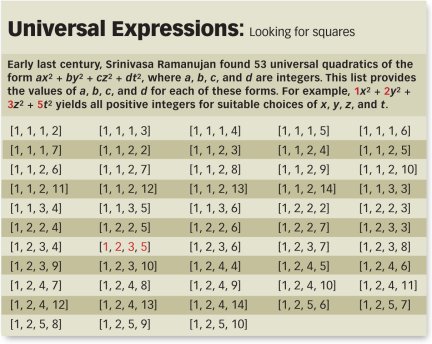 Ramanujan’s discovery led mathematicians to tackle the general question: How can you predict when a quadratic form represents all positive integers?

Now, Manjul Bhargava of Princeton University and Jonathan P. Hanke of Duke University in Durham, N.C., have demonstrated that this question has a simple, surprising answer. Bhargava described the findings—a set of theorems—at the International Conference on Number Theory and Mathematical Physics, held last December at SASTRA University in Kumbakonam, India.

The work has turned up “many amazing results,” says Ken Ono of the University of Wisconsin–Madison. “They are the ultimate theorems in the theory of representations of integers as sums of squares.”

Bhargava has had a strong interest in math since childhood (see “Number Theory and Musical Flow,” below). His mathematical research dating back to his graduate school years at Princeton contributed to the recent findings.

In his 2001 Ph.D. thesis, Bhargava proved several important theorems in a branch of number theory that grew out of work done by German mathematician Karl Friedrich Gauss in 1801. It focused on the polynomial expressions called quadratic forms, such as ax2 + bxy + cy2, in which each term has a variable with an exponent of 2 or is the product of two variables.

Gauss had developed a method for combining two quadratic equations (ax2 + bxy + cy2 = 0) in a way that differs from normal addition. Such a method is known as a composition law. Gauss’ composition law offered a new way of thinking about relationships among numbers and led to the development of the mathematical field now known as algebraic number theory.

In his graduate work, Bhargava discovered 13 composition laws and developed a mathematical framework for explaining them.

“Bhargava’s work is marked by extreme ingenuity and depth,” says Krishnaswami Alladi of the University of Florida in Gainesville. Bhargava’s unexpected discovery of new composition laws created an exciting line of research on a topic that had seen little activity since the time of Gauss.

For these novel and elegant formulations, Bhargava earned not only his doctorate but also a prestigious fellowship at the Clay Mathematics Institute in Cambridge, Mass. In 2003, at age 28, he joined the Princeton faculty as a full professor, one of the youngest scholars ever to achieve this rank.

In the meantime, Bhargava had become intrigued by the question of which quadratic forms represent all positive integers. Mathematicians call such expressions universal quadratic forms.

Mathematicians wanted to know how many more universal quadratics exist. They therefore needed a simple test to determine whether a given form represents all positive integers.

In 1993, John H. Conway of Princeton and his student William Schneeberger announced a startling result that applies to a subset of quadratic forms, those that can be defined by a specific type of matrix. To decide whether a form within that group is universal, they needed only to check whether it can represent each of nine integers: 1, 2, 3, 5, 6, 7, 10, 14, and 15. If it does, then that particular quadratic form represents all the positive integers.

This result came to be known as the “15 theorem.” It serves as a filter, separating a certain group of quadratic forms into universal and nonuniversal expressions.

The universal quadratics previously recognized by Lagrange and Ramanujan belong to the matrix-defined subset considered by Conway and Schneeberger. So, the 15 theorem also provides a rapid proof of Lagrange’s four-square theorem.

Conway and Schneeberger never published their lengthy and intricate proof of the 15 theorem. They proceeded, however, to try to extend it to a much wider group of quadratic forms, described as integer valued. This group includes expressions such as 3x2 + xy + 5y2 + 6z2 + t2.

After performing additional calculations, Conway and Schneeberger conjectured that testing the numbers from 1 to 290 would suffice to tell whether a particular form is universal.

In the late 1990s at Princeton, Conway happened to describe the 15 theorem to Bhargava. “I was totally amazed: first, that something so incredible could be true and, second, that there was no [published] proof,” Bhargava says. “I immediately dropped everything else I was doing . . . and started thinking about the problem and its suspected generalization.”

Bhargava began by devising a new proof for the 15 theorem. Recasting the problem in a geometric context, he came up with a line of reasoning that was much simpler and shorter than the proof originally developed by Conway and Schneeberger. With a simplified calculation, he found that, altogether, there are 204 universal, matrix-defined quadratic forms.

Mathematicians previously thought that the tally had been completed in 1948, when Margaret F. Willerding in her doctoral research at St. Louis University painstakingly worked out 178 universal matrix-defined quadratic forms. Bhargava’s new enumeration, taking advantage of the shortcut provided by the 15 theorem, shows that Willerding missed 36 universal forms, listed one universal form twice, and included nine forms that are, in fact, not universal.

“This result required the use of some very clever and subtle arithmetic arguments,” Conway says.

Bhargava also discovered a way to check whether a quadratic form represents all prime numbers, that is, numbers evenly divisible only by themselves and 1. One needs only to check the primes up to 73, he reported.

To crack the much tougher 290 conjecture, Bhargava began collaborating with Hanke. “We were both interested in questions about quadratic forms, though from different perspectives,” Hanke says. Hanke, for instance, was adept at using computers to examine quadratic forms.

“There are not too many number theorists who use computers to assist them in proving theorems, though there are more every day,” Hanke says. “While a computer does not even come close to replacing a mathematician, it can be very useful in handling big tasks which you understand very well.”

Hanke has explored the connection between quadratic forms and mathematical structures called modular forms and written software to enable others to do so.

“The ability for people to use computers to help them experiment with ideas, find patterns, and even occasionally prove theorems should have a very positive role in the development of mathematics in the future,” Hanke contends.

After several years of effort, Bhargava and Hanke succeeded in proving the 290 theorem. Their direct, elegant solution to the problem answered a fundamental question about quadratic forms.

First, they found that a check of whether each of a certain set of 29 integers, each less than or equal to 290, reveals whether all integers can be represented by a given quadratic form. Bhargava and Hanke then used that finding to enumerate the complete list of universal, four-variable, integer-valued quadratic forms, which they determined includes 6,436 quadratics.

“The problem of finding and understanding universal forms with integer coefficients has now been completely solved,” Hanke says.

However, “there is always room to play,” he adds. “Some of the most fruitful ideas in mathematics arise by revisiting questions that have been answered, but seeing them from a new perspective.”

Alladi notes, “In establishing this result, [Bhargava and Hanke] used a variety of techniques and results due to Ramanujan.” Last December, Bhargava was one of two recipients of the SASTRA Ramanujan Prize, awarded annually to young mathematicians for outstanding contributions in areas influenced by Ramanujan.

In his address accepting the award, Bhargava noted that Ramanujan would have been pleased not only with the complete resolution of the problem of universal quadratic forms but also with the methods employed in the proofs.

Portrait of a young mathematician

Manjul Bhargava says that music and math “stimulate the creative spirit in very similar ways.” Now a mathematician at Princeton University, Bhargava has been fascinated by the properties and relationships of numbers since his childhood. His mother, a mathematics professor, encouraged his early interest in numbers, and he enjoyed reading books on recreational math. By ninth grade, Bhargava had completed all his Long Island, N.Y., high school’s math and computer courses.

As a child, Bhargava had a variety of other interests. He biked, played tennis, and flew kites. He also learned to play the sitar, guitar, and violin, and his mother introduced him to the tabla, a pair of small Indian drums, and to classical Indian music.

During his teen years, Bhargava studied the tabla in India, and he continued to play while pursuing mathematics as an undergraduate at Harvard University. An accomplished musician, he gave public tabla performances in the Boston area.

Both number theory and tabla playing may be viewed as the study of patterns, Bhargava says. “The goal of every number theorist and every tabla player,” he explains, “is to combine these patterns, carefully and creatively, so that they flow as a sequence of ideas, tell a story, and form a complete and beautiful piece.”