A frozen fossil of a horse has yielded the oldest genome sequence ever compiled. Clocking in at about 700,000 years old, the horse DNA is nearly 10 times older than the previous record holder, the genome of an 80,000-year-old Denisovan, an extinct evolutionary cousin of Neandertals and modern people.

The extreme age of the horse’s genetic material has raised hopes that scientists can find even more primitive DNA, perhaps a million years old or more. The ancient DNA also provides scientists with some of the first clues about the genetic changes that accompanied horse domestication.

An international team of researchers deciphered the genome of the horse from the Middle Pleistocene, along with those of a 43,000-year-old horse, a modern donkey and five contemporary domestic horse breeds. Using those data, the researchers pushed back the emergence of the ancestor of horses, zebras, asses and donkeys to about 4 million to 4.5 million years ago. That makes the ancestor twice as old as previously thought, the team reports in the June 27 Nature.

The study also hints at both the origin and future of the last truly wild lineage of horses.

Prior to the new work, researchers had pulled snippets of DNA that were hundreds of thousands of years old from cave bear fossils and ice cores. Those samples’ molecules were far smaller than the billions of chemical units, or nucleotides, that make up a genome, an organism’s complete set of genetic instructions. “It was literally nothing more than a few nucleotides,” says study coauthor Ludovic Orlando, an evolutionary biologist at the University of Copenhagen.

So Orlando and his colleagues were astounded by how well preserved the biological molecules were in the ancient horse foot bone. The fossil was found in permafrost at the Thistle Creek site in the Canadian Yukon.

Experts on ancient DNA say that natural deep freezes such as permafrost are the place to look for really old specimens. “They took advantage of the best possible conditions,” says Carles Lalueza-Fox, of the Institute of Evolutionary Biology in Barcelona. But, he says, the question remains: “How far back can you go in nonpermafrost environments?”

The study may help settle a debate over whether a Mongolian equine called the Przewalski’s (pronounced sheh-val-skees) horse is really wild and not domesticated, like all other horse breeds. Named for a Russian colonel who led an expedition in 1881 that found them, Przewalski’s horses were extinct in the wild for decades until a captive breeding program reintroduced them to Mongolia in the mid-1990s.

Some experts consider these sturdy steppe animals a separate species (Equus ferus przewalskii) and the last wild horse. Others insist the wild horses are a subspecies, a feral offshoot of domestic horses (Equus ferus caballus) like the American mustang, Chincoteague pony or Australian brumby. The debate has been difficult to resolve because, until Orlando and his colleagues deciphered the genomes of the two prehistoric horses, scientists had no examples of wild ancestral horses to compare with Przewalski’s and domestic horses.

By lining up the DNA from the ancient and modern horses, the researchers concluded that Przewalski’s horse is a separate, truly wild species that split sometime between 38,000 and 72,000 years ago from the lineage that led to domestic horses. Since that time the two groups have not interbred, the researchers found. “It is 100 percent wild. There’s not domestic genetics present in that horse,” Eske Willerslev of the University of Copenhagen says of the individual the team investigated.

Despite stemming from only 13 or 14 animals in breeding programs in zoos, Przewalski’s horses have retained more genetic diversity than the domestic horse breeds the team examined. That diversity is good news for conservation efforts. “It might mean we could have a very good chance at saving that horse population,” Orlando says.

Meanwhile, the researchers are gleaning information about horse domestication by identifying genes that differ among domestic horses, Przewalski’s horses and the fossils. So far, genes involved in production of blood and sperm, muscle organization and coat color show signs of being important for domestication.

Back Story | From Horses to Humans 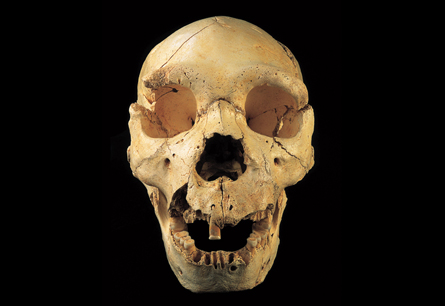 The 700,000-year-old horse genome raises the possibility that scientists may one day read the genetic blueprints of human ancestors that are just as old. Researchers have already sequenced the DNA of two recent human cousins — Neandertals and Denisovans — using fossils dating to about 40,000 to 80,000 years ago (SN: 8/25/12, p. 22). These hominid fossils were found in cool, dry caves. Such environments preserve DNA by slowing its decay. Scientists don’t know how long DNA can survive intact, but a recent study suggested it could last at least 1 million years if conditions were right. So researchers might find DNA lingering in fossils of Homo erectus, which lived in Africa and Asia some 1.9 million to 140,000 years ago, or Homo heidelbergensis, which lived in Africa and Europe 700,000 to 200,000 years ago. Some anthropologists think H. heidelbergensis (skull shown) gave rise to Neandertals and Homo sapiens; DNA would help clarify these relationships. Another important discovery would be genetic material from the earliest H. sapiens, which lived some 200,000 to 100,000 years ago. Sequencing such DNA would “transform our understanding of human origins,” says anthropologist John Hawks of the University of Wisconsin–Madison. “We don’t need to go back 700,000 years to have tremendously interesting insights into our evolution.” —Erin Wayman