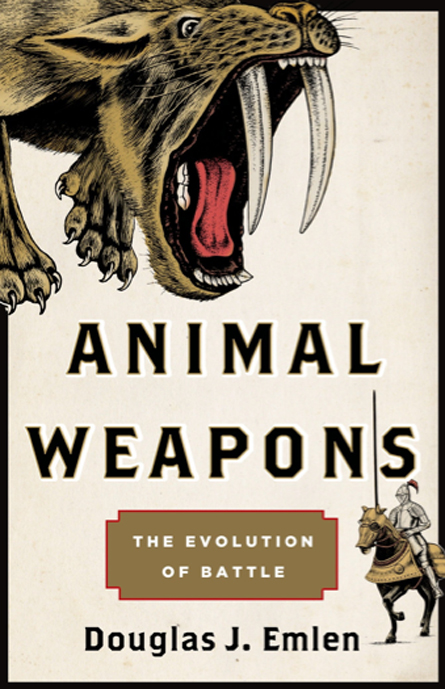 The animal world is full of examples of extreme weaponry: the mantis shrimp’s supersonic punch, the fiddler crab’s giant claw, the African elephant’s long tusks. These weapons have evolved as the result of biological arms races lasting millions of years.

In Animal Weapons, Emlen, a biologist at the University of Montana in Missoula, explains the science behind those arms races, including how battles for resources and females can influence the evolution of weaponry and how this sort of competition has resulted in some of the craziest looking appendages to ever grace an elk’s head or a beetle’s back.

Along the way, Emlen peppers the text with his own adventures, such as when he was a graduate student in Belize and sliced his thumb open with a machete. With no hospital nearby, his thumb was sterilized with rum and the cut sutured shut with the bites of trap-jaw ants. In another tale, Emlen describes a mass of 100,000 beetles attacking a pile of elephant dung he had left out near camp: “It was as if somebody was pouring beetles from a bucket.”

Emlen’s writing is best when he discusses the beetles and other insects that he studies. But there are enough bigger critters in the book, from narwhals to saber-toothed cats, to satisfy the insect-phobic.

Throughout the book, Emlen draws parallels between the evolution of animal weaponry and human weaponry. Battling rhinoceros beetles are more similar to 11th and 12th century European knights than you might expect — in both cases, Emlen argues, males fight for access to reproductive females. But Emlen warns that comparisons between animals and humans can go only so far. Today’s nuclear, biological and other extreme weapons have changed the stakes and logic of battle, resulting in an arms race that has no analog in the natural world.

Buy Animal Weapons from Amazon.com. Sales generated through the links to Amazon.com contribute to Society for Science & the Public’s programs.