Researchers are a step closer to the Angels & Demons scenario dreamed up by novelist Dan Brown, in which a rogue priest tries to destroy the Vatican with a vial full of antimatter.

In reality, the amount of antimatter created to date wouldn’t release enough energy to heat a pot of coffee. But physicists at CERN, the European particle physics laboratory near Geneva, have now managed to make and hold dozens of antihydrogen atoms for a fraction of a second, far longer than ever before.

The work, reported online November 17 in Nature, is a significant step toward making antimatter stick around long enough to be able to study how it differs from ordinary matter.

“In 10 years people will forget Dan Brown, but we’ll be in the textbooks,” says team spokesman Jeffrey Hangst, a physicist at Aarhus University in Denmark.

Theory suggests that equal amounts of matter and antimatter should have been formed in the Big Bang nearly 14 billion years ago, and physicists have long puzzled over why matter predominates. Several experiments at CERN seek to explain that.

Physicists at the lab first made a few fleeting atoms of antihydrogen in 1995. In 2002 the team reported ways to make lots of antihydrogen atoms at low energies — crucial for trying to perform experiments with them.

The new results come from Hangst’s experiment, known as ALPHA. The experiment cools a stream of antiprotons into a cloud of about 40,000 particles at 40 kelvins, or 40 degrees Celsius above absolute zero. The researchers nudge that cloud very gently into a couple million cold positrons. About one time out of 10, an antiproton and a positron combine to make an antihydrogen atom.

For roughly every 100,000 antihydrogen atoms made, researchers managed to trap just one of them using strong magnetic fields. The Nature paper reports 38 such trapped atoms, which were held for up to a sixth of a second before they escaped and annihilated themselves on the side of the container.

If scientists can keep more antihydrogen around for a longer period of time, they can do detailed studies such as spectral measurements that reveal how the material’s internal energetics differ from those of ordinary hydrogen. “It’s so exciting because now we can subject antihydrogen to anything anyone has ever done with hydrogen in the past,” says Hangst. “There are 100-odd years of atomic physics that we can learn how to do again with antiatoms.”

Antihydrogen looks to be a growing field. Two other new antihydrogen experiments are just getting underway at CERN. And a long-standing competitor called ATRAP, which works about five meters down the antiproton beam from ALPHA, is focusing on making much bigger, colder blobs of antiprotons that can then be combined with positrons to make antihydrogen.

In a paper published online November 16 in Physical Review Letters, the ATRAP group reports centrifugally separating antiprotons from electrons, which could provide a new way to isolate low-energy antiprotons for making antihydrogen. “We have up to 3 million antiprotons whose temperature is less than 6 kelvin,” says team leader Gerald Gabrielse of Harvard University, who adds he is “delighted” by his competitor’s latest work.

Hangst’s group is also pushing to get temperatures (and thus particle energies) lower. CERN’s antiproton beam is being shut down for six months, but will start up again in May for its next run. And if funding comes through, a planned upgrade in the next couple of years would increase the antiproton supply by 100 times.

Trapping antihydrogen long enough to study it requires merging clouds of antiprotons and positrons at extremely low temperatures. Some of the particles will pair up to form antihydrogen atoms, which can be trapped for a fraction of a second by a powerful magnetic field before they make their way to the walls of the container and annihilate on contact.

The outer shell of the ALPHA experiment detects particles generated when antihydrogen atoms annihilate, employing the same material that accelerators like the Large Hadron Collider use to detect some of the debris from particle collisions.

Inside the annihilation detector is a cylinder-shaped superconducting electromagnet designed to trap antihydrogen atoms in a “magnetic minimum” —the magnetic equivalent of trapping a marble in the bottom of a concave dish.

When a pair of positrons collide inside the mixed cloud, there is a chance that one of them will then bind to a nearby antiproton to form an atom of antihydrogen.

With the superconducting magnet turned on, antihydrogen atoms are trapped in the cylinder much like a marble settling at the bottom of a concave dish (brown).

With the magnet turned off, the atoms drift into the walls of the apparatus, where their destruction is sensed by the annihilation detector—proof that they did in fact exist.

Back Story | A BRIEF HISTORY OF ANTIMATTER 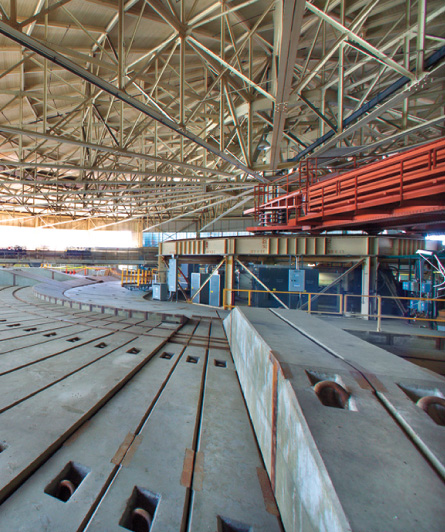 1931 Physicist Paul Dirac hypothesizes the existence of  “a new kind of particle, unknown to experimental physics, having the same mass and opposite charge of the electron.”

1995 Physicists at CERN produce the first antihydrogen atoms, but the particles are too short-lived to be studied in detail.

2010 The ALPHA experiment produces antihydrogen that lasts a fraction of a second, opening the door for experiments on the physics of antiatoms.