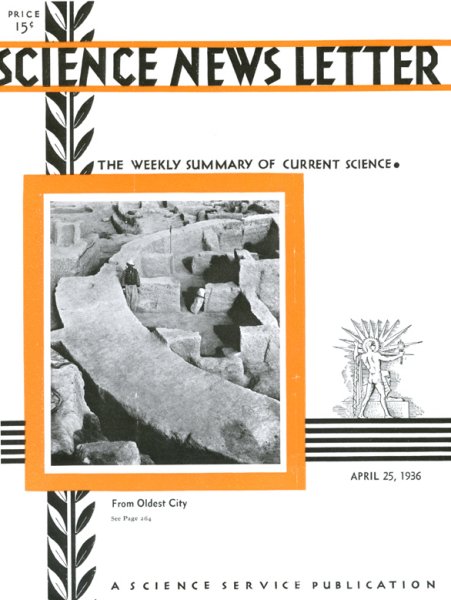 WAR TOWER IN BIBLE WAS “OLD-FASHIONED” EVEN THEN

It is hard to believe in this age of inventive speed.

That time amazingly stood still in this way in ancient Bible lands is revealed by latest excavations at that famous site, “the oldest city in the world,” Tepe Gawra in Mesopotamia.

When King Abimelech met his death attacking this round temple-battle tower, it was then an ancient war device at least 3,000 years old. According to the story, Abimelech was mortally wounded by a rock hurled by a woman from the wall above. In a drawing by the artist Dore, he is begging his armor-bearer to kill him so that death might not come from the hand of a woman. The ancient prototype of the round battle-tower, as found at Tepe Gawra, is shown on the front cover.

The long-impending battle over the use of alcohol as a blending agent for gasoline in motor fuel reached a climax at the meeting of the American Chemical Society, in Kansas City, Mo.

Through a maze of technical phraseology, chemical symbols, and graphs, five speakers spoke more than 20,000 words—not counting discussion—concerning how and by whom the motor fuel of America’s trucks and automobiles shall be supplied.

Three camps were distinctly apparent in the conflict. On one side was the powerful petroleum industry. At the opposite extreme were those led by the Chemical Foundation, working to demonstrate that a blend of alcohol and gasoline is a perfectly good and practical fuel for motor cars.

Midway between these groups were those men who are concerned with the scientific sides of the problem only and not the vast economic aspects that constantly hovered in the background.

The petroleum industry sees, in the rise of alcohol blends of gasoline, a potential competitor that will cut gasoline consumption. The millions upon millions of dollars invested in oil fields, wells, refining plants, and enormous distributing systems are at stake.

Advocates of alcohol-fuel blends see the problem intimately linked with the agricultural salvation of the nation, for behind the drive for alcohol-gasoline blends as fuel is the hope that this alcohol will be made from farm crops. And that the American farmer will thereby have another outlet for his crops over and above the use for foodstuffs.

Latest news from the interior of the atom and the depths of space is blended in the annual report of Dr. W. F.G. Swann, director of the Franklin Institute’s Bartol Research Foundation laboratories. These laboratories are devoted entirely to the study of the nuclei of atoms and of cosmic radiation.

Perhaps it seems strange that atomic cores and cosmic rays should both be chosen as subjects for a single research program.

Their connection, however, is quite intimate. First, the various kinds of cosmic-ray particles are known to be identical with those particles shot out by the nuclei of radioactive atoms. Second, one way to learn about nuclei is to bombard them with high-speed particles like cosmic rays; or, by watching what happens when cosmic rays themselves hit the atomic cores.

Some of the researches which Dr. Swann described were: