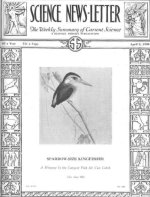 The Celebes Wood Kingfisher (Ceycopsis fallax), shown on the cover of this week’s SCIENCE NEWSLETTER, is a bird scarcely as large as an English Sparrow. Similar kingfishers of tiny dimensions are found in various tropical countries. They are hunters as well as fishers and feed on insects and other life as well as on small minnows. They frequent forests quite as much or more than watercourses.

The picture is supplied through the courtesy of the Field Museum of Natural History.

OUR UNIVERSE PART OF “SUPER-UNIVERSE”

We live in a “super-universe.” The sun, the Milky Way, all the stars we see in the night sky, even when looking through a large telescope, form a huge system made by the condensation of a loose swarm of smaller clusters of stars. One of this system’s component clusters is the globe of stars between 30 and 60 quadrillion miles in diameter, in which our sun is an insignificant member.

Such is the latest picture of the structure of the cosmos, delineated by Dr. Harlow Shapley, director of the Harvard College Observatory, in a Harvard Observatory circular just released.

ISLETS ARE PEAKS ON SUBMERGED RIDGE

Four tiny islets in the middle of the Atlantic Ocean, the largest of them only an eighth of a mile across, bear heavy evidence against the validity of the Wegener hypothesis of the westward drift of the American continents, which has proved very attractive to many geologists. Dr. Henry S. Washington, of the Carnegie Institution, discusses the significance of these rocks, and especially their bearing on the problem of the origin of the long submarine ridge of which they are a part, in the first issue of the Journal of the Maryland Academy of Sciences.

The islets are known as St. Paul’s Rocks, and they stand up alone in the midst of the South Atlantic, almost midway on the shortest line that can be drawn between Africa and South America. But although the highest point on them is only 64 feet above high-tide mark, the islands are lofty mountaintops. For they are a part of a 9,000-mile-long submarine mountain range on the ocean bottom, that extends through the middle of the Atlantic Ocean throughout almost its entire length, and rises in places as much as 18,000 or 20,000 feet above the bottoms of adjacent deeps. Other peaks that raise their heads above the surface of the sea form the islands and island groups of the Azores, Ascension, Tristan da Cunha, St. Helena, Gough, and Bouvet. Of these, all except St. Helena lie directly on top of the ridge.

The course of the ridge is most peculiar and suggestive. It holds very closely to mid-Atlantic throughout, running almost directly north and south in the South Atlantic, swinging northwesterly to parallel the coasts of South America and western Africa, then north and northeasterly in the North Atlantic. In general, it runs parallel with the continental land lines through its whole length.