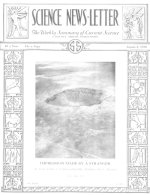 SHOOTING STARS, THE STORY-TELLERS OF THE UNIVERSE

Of fortunate rarity are celestial visitors like the huge meteoric mass that dug the famous Meteor Crater in Arizona about 2,000 years ago. This scar on the face of the earth near Winslow, Ariz., is four-fifths of a mile across and 450 feet deep. It is shown on our cover this week in a photograph taken recently for Science Service from a transcontinental airplane.

Radio receiving sets in automobiles may please the man who doesn’t like to miss the five to six p.m. program, but they are becoming hated objects of dread to the hijacker, holdup man, and petty thief.

Twenty-five leading cities now have their police cars equipped with sets to receive messages from headquarters on short wavelengths, with the result that in the city of Detroit alone in 1929, 22,598 messages were sent to police cars, of which 8,288 were actual emergencies. As the result of these messages, 1,325 arrests were made, and in many cases the criminal was caught before he had left the scene of the crime.

The Dutch elm disease, a fungus blight that has caused serious damage to elm trees in Holland and has spread into other European countries, has been discovered in Ohio. Three trees in Cleveland and one in Cincinnati have been definitely identified as harboring the disease and destroyed.

Its symptoms are sudden wilting, followed by yellowing and dropping of the leaves. Death of the tree follows, either at once or after a few years of struggle. No cure is known.

The disease is caused by a fungus known as Graphium ulmi. It is related to other fungi already known in this country, which have made themselves more or less troublesome as timber stainers, but so far not as killers of trees.

The Ohio Agricultural Experiment Station at Wooster, Ohio, has established a laboratory for the study of the elm disease. The scientists in charge desire to have specimen branches of any elm trees showing suspicious symptoms sent to them.