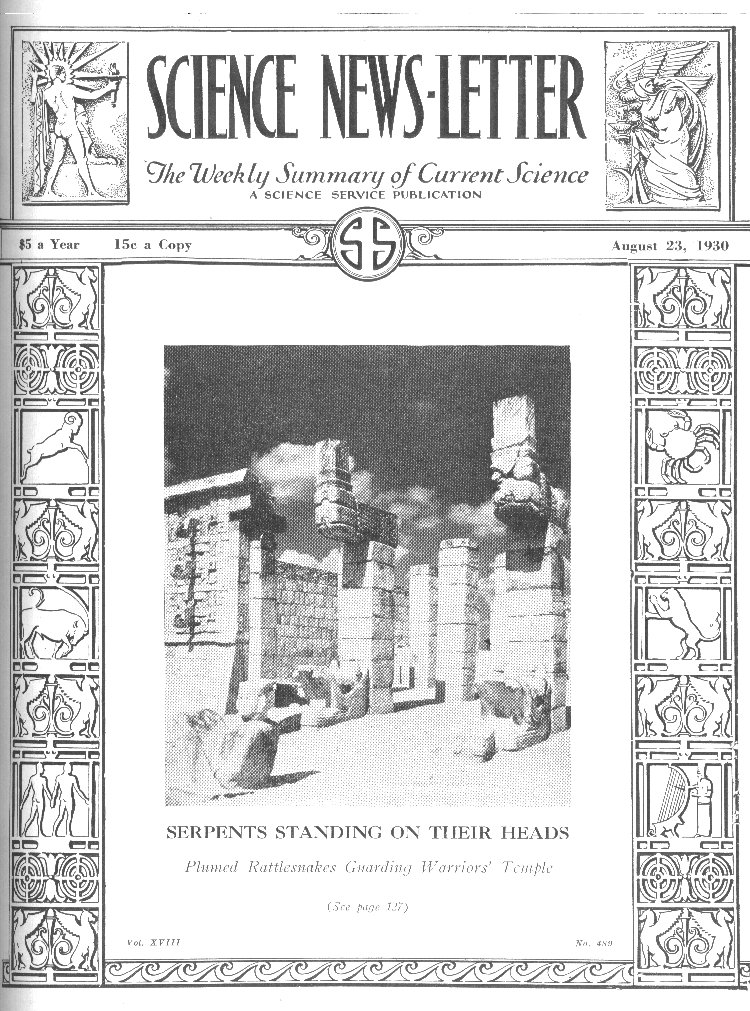 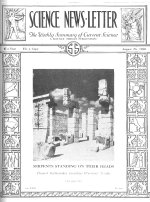 Indian architects and sculptors of the American tropics in prehistoric times had strikingly original ideas. On the cover you see the entrance to the beautiful Temple of the Warriors at Chichen Itza, in Yucatan.

The Toltecs, who conquered the Mayas at Chichen Itza, remained in the city and added greatly to its beauty, forcing Mayan craftsmen to execute their orders. Toltec ingenuity devised the serpent columns, shown at the temple gate. The serpents, standing acrobatic-fashion on their chins, were designed for the honor of the great deity, the Plumed Serpent. The pose represented to the Indian imagination the descent of the Serpent, whose feathers enabled him to fly down to earth to bless his chosen people. When you recall the three famous types of Greek columns used over and over in Europe, you can see than an invention of a column type is an achievement and an architectural event.

The Chac Mool, the figure of a man seated with his knees drawn up, and a bowl for offerings or incense lying in his lap, is still a riddle to modern archaeologists. Dr. Herbert Spinden of the Brooklyn Museum has surmised that this queer sculptor’s creation may have been connected with a peculiar Toltec cult in which drunkenness figured. A number of these Indian “sphinxes” have been found, but none with any conclusive clues to their meaning and use.

Listening to the Naval Observatory radio time signals and then setting your clock by hand is now unnecessary. At the meeting of the Institute of Radio Engineers in Toronto, Canada, H.C. Roters and H.L. Paulding of the Stevens Institute of Technology described a radio–electric-clock system in which this is done automatically, and without attention. Every day the clock is reset to the exact second by the noon time signals.

Bacteria that find oxygen, the very breath of life to most organisms, to be a rank poison and that breathe hydrogen instead have had their physiological secrets investigated by Prof. J.W. McLeod of the University of Leeds school of medicine.

Plants and animals take up oxygen simply as the readiest means of obtaining energy from food substances. These bacteria, which prefer places where there is little or no air, are able to get their needed energy by a different process. They detach hydrogen from certain complex organic compounds, and the breaking apart of these molecules releases energy.

Oxygen is inimical to this process. If the newly released hydrogen comes into contact with oxygen, the two elements unite to form hydrogen peroxide. Bacteria that can live in the presence of a very little air can tolerate a certain low concentration of hydrogen peroxide, but those that demand surroundings where there is no oxygen at all apparently find themselves paralyzed if hydrogen peroxide is generated even in small quantities.

A curious fact about these oxygen-hating bacteria is that they are quite lacking in one of the enzymes or organic ferments, catalase. This particular enzyme was once thought to be absolutely indispensable to any kind of life.