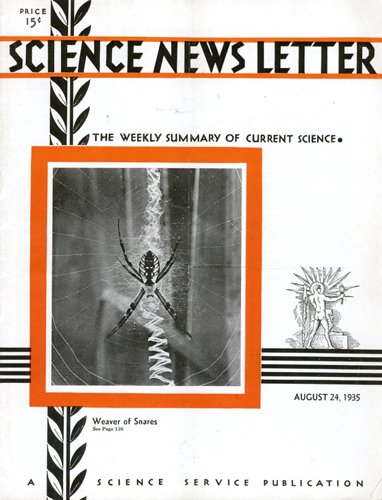 DID SPIDERS TEACH MAN THE WEAVING OF NETS?

Greek legend has it that Arachne, the first mortal spinster, learned so perfectly Athene’s art of weaving that she became presumptuous enough to compete against the goddess, and as a punishment was transformed into a spider.

Whatever may be the justification for the old story, it would seem at least as likely that men learned from spiders the weaving of nets to trap birds and other small quarry more directly than women did the art of weaving cloth. While nobody knows when or how nets were actually invented, it is easy to speculate that some Neolithic hunter, idling among the riverside reeds on a day when birds were shy, may have watched a spider spread her net for her own winged prey, and so received the inspiration to try something of the same kind to catch his food with more certainty and less labor.

Arachne may have taught men the use of birdline, too, for the cross threads in her web are sticky with a glue of her own making, which is the ultimate prey-catching device that makes the whole mechanism effective.

So fine are the threads, even thus coated, that under ordinary circumstances they are quite invisible. But after a cool night they may be so beaded with tiny dewdrops that they can be photographed. It was in this state that Cornelia Clarke caught the web shown on the cover of this number of the Science News Letter.

An electrical motor built in 10 days by a 21-year-old Moscow student is now the smallest machine of its kind in the world. Dwarfing other tiny motors, it is about the size of a large fly. It weighs only .37 gram.

Constructed by Yuri Yuremin, a student at the Moscow Institute of Non-Ferrous Metals, it consists of 31 parts. A 4-volt pocket-flashlight battery can operate it, and it can also run on regular city current reduced in voltage by a transformer.

The current-carrying parts are of brass, and all insulating parts are ebonite. Aluminum rivets fasten it to a celluloid base. The armature measures about .16 inch across, and has 380 windings of wire not quite .002 inch in diameter.

Another advance in the search of physicians to discover the cause of cancer has just been revealed at Cambridge, Mass., in the report of Prof. Avery A. Morton and Dr. Daniel B. Clapp of Massachusetts Institute of Technology and Dr. Charles F. Branch of Evans Memorial Hospital, Boston, that they have discovered two new chemicals that will produce the disease in mice.

The two new cancer-causing chemicals are known as triphenylbenzene and tetraphenylmethane. In their preliminary account (Science, Aug. 10), the Cambridge scientists state, “In a year’s time 12 out of 60 mice had well-developed tumors of a highly malignant type. In the case of tetraphenylmethane 25 mice were painted twice weekly with a 0.5 percent solution in benzene. After the same period well-developed epitheliomata were present in eight cases. It is interesting to note that the percentage of positive results is relatively high in spite of the long time necessary to induce growth.”

The carcinogenic action of the two new hydrocarbon compounds is considerably slower than previously reported chemicals that have a similar action. And they differ markedly in chemical structure.