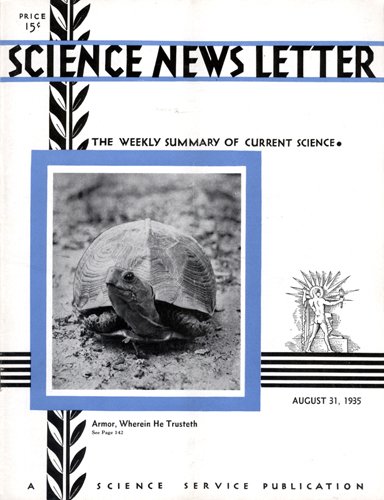 Some of the early saurians did the same kind of thing; and there were also the glyptodons and the plate-armored knights of the fifteenth century. But always, when a creature has put too much dependence on an impenetrable shell, there has come a stronger, who taketh away the armor wherein he trusteth, and distributeth the spoils—whether it be a tyrannosaur, or a saber-tooth cat, or a yeoman with long-bow and clothyard shaft, or a vacationing small boy with a chunk of rock.

With a hint that it may have a future practical bearing on the cancer problem, chemists gathering for the semiannual assay of progress conducted by the American Chemical Society were greeted with the announcement that pantothenic acid, believed to be a universal essential in growth and respiration of the cells of living bodies, has been isolated.

This important contribution to an understanding of the chemical nature of life processes has been made by Prof. Roger J. Williams of Oregon State College, who first reported the existence of pantothenic acid 2 years ago.

Although the amount of pure acid obtained by Prof. Williams was scarcely equivalent in weight to half a drop of water, about 20 milligrams, it proved sufficient for a dozen or more analyses of its chemical composition.

Pantothenic acid, Prof. Williams found, is composed of just four elements, carbon, hydrogen, oxygen and nitrogen, united in such a way that the resulting product is somewhat similar to the vitamins and to the amino acids that are fundamental building blocks in protein.

Science has come to the rescue of housewives, with an explanation of why their favorite recipe for making cranberry jelly sometimes won’t work.

It’s all on account of viscosity—a scientific word describing the flowing qualities of liquids. Chemists ascertain the relative viscosity of liquids by comparing them with water as to flowing quality. Thus, molasses has a viscosity many times that of water.

Reporting the results of their studies before the American Chemical Society meeting here today, George L. Baker and Ralph F. Kneeland of the Delaware Agricultural Experiment Station say that a high viscosity means better jelly—up to a certain point. This, they found, is because pectin, the compound that actually makes jelly “jell,” is most abundant in juices of a high viscosity.

One way viscosity can be increased is by the addition of sugar, since this makes a “heavier” and more slowly flowing liquid.

Studies at the Delaware Experiment Station show that far from being stable, the juices of ordinary “run of the market” cranberries have relative viscosities of anywhere from 40 to 132.