As any fan of Doctor Who or Marty McFly can attest, few areas of science excite quite as much public interest as time travel. Step into a police box or a DeLorean, flip a switch, and you’re off to change the world — or perhaps save it. 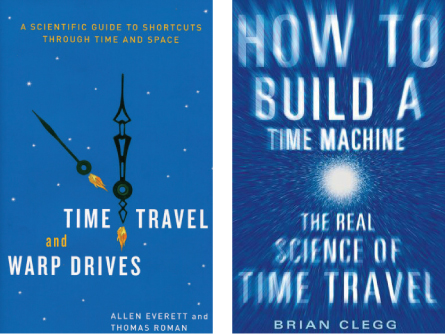 Would-be time travelers now have two new relevant guides to the promise of time machines. Which you might prefer depends on just how much you want to understand the mathematics underlying a machine like the TARDIS.

Surprisingly, time travel is not that difficult in principle; nothing in the known laws of physics prohibits it. The problem is with today’s technology.

Take Ronald Mallett, the University of Connecticut physicist who has been trying to build a time machine to visit his father, who died when Mallett was 10 years old. Using a ring laser, he hopes to generate “closed timelike curves” in which particles can return to the past. Mallett has realized that his machine could take him no further than the time when it was switched on — making a visit with his late father impossible.

Everett and Roman are physicists who have probed the theoretical possibilities of time travel. Their expertise shines as they talk the reader through the underlying math of time travel, much like an introductory college course. These are writers who don’t shy away from introducing Lorentz transformations in the third chapter.

In contrast, Clegg’s book is more like chatting with fellow students after a professorial lecture. Its breezy summary glosses over some of the finer points of time travel, but allows an excellent entry point for readers less willing to slog through grim mathematical details.

Fascination with time travel is itself timeless; witness the recent excitement over neutrinos possibly moving faster than light. If true, this would also permit the particles to travel backward in time. If that happens, you’ll need a handy reference guide. — Alexandra Witze