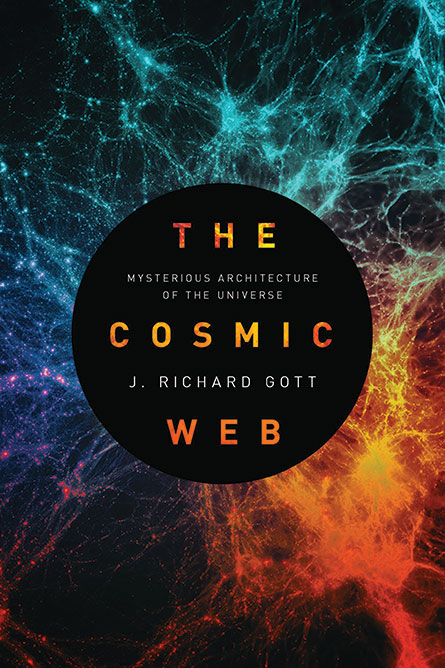 We live in a universe of either honeycombs or meatballs. At least, that’s how cosmologists imagined the universe not long ago. But neither analogy is quite right. The universe instead resembles a vast spiderweb, made of gas and galaxies. It’s a view of the cosmos that partly originated in a high school science project.

Weaving together personal anecdotes with physics and math, Princeton astrophysicist J. Richard Gott’s The Cosmic Web chronicles the nearly 100-year quest to understand the anatomy of the universe. The journey focuses on efforts by Gott and his colleagues to see the “big picture” and figure out what the universe’s structure can reveal about the conditions during the first moments after the Big Bang.

By the early 1980s, there were two schools of thought: One stated that the cosmos consists of isolated clusters of galaxies (meatballs) while the other claimed that galaxies form along walls enveloping vast voids (honeycombs). In 1986, Gott and colleagues introduced a sort of compromise: The universe looks like a sponge, with galaxies tracing out a dense cosmic web. This web arose in the wake of the Big Bang and stretched from subatomic sizes to cosmic proportions during the subsequent 13.8 billion years of cosmic expansion. Gott’s vision has since been vindicated as telescopes have revealed that galactic superclusters and filaments indeed link together in a web stretching across the universe.

Gott brings detailed insight to how our view of the cosmos has changed, providing a thorough accounting of how cosmologists arrived at these revelations. His cosmic sponge idea, for example, was inspired by his high school project on a class of three-dimensional polygons that, when stacked, create a structure reminiscent of a marine sponge. The project won him second place at the 1965 Westinghouse Science Talent Search (now the Intel Science Talent Search, run by Society for Science & the Public, which publishes Science News).

At times, it’s not clear who Gott’s intended audience is. The blend of memoir and technical prose gives the book an uneven tone. Clever analogies sit alongside equations and mathematical notation, both of which share space with anecdotes from his career. These asides, while fun to read, sometimes make already tricky concepts even harder to follow. Issues of tone and audience aside, cosmology junkies will find a new and deep appreciation for what goes into understanding how the universe works.

Buy The Cosmic Web from Amazon.com. Reviews on the Science News website include Amazon.com links that generate funds for Society for Science & the Public programs.