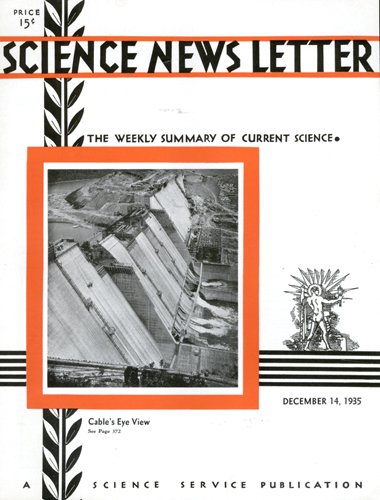 Suspended high in the air from the cable-way, the photographer looked down on the view of Norris Dam that appears on the front cover of this week’s Science News Letter.

Water is now impounded to a depth of 50 feet. When full, the dam will back water 40 miles up the Clinch and Powell River valleys. Ninety-five percent of the concrete has now been poured.

If a person memorizes certain kinds of material perfectly, and goes to sleep afterwards, he will recall more of it, and also relearn the whole task more economically after a lapse of 24 hours, than if he waits even a few hours before he goes to sleep, Dr. H.M. Johnson, professor of psychology of American University, Washington, D.C., announced at Cornell University.

Experiments based on different methods, made by Dr. Rosa Heine Katz, at the University of Göttingen, and by Joseph F. O’Brien, graduate student at American University, showed that all the subjects who were studied were better able to recall and also to relearn material that they had learned by rote and partially forgotten, if they first slept for eight hours and then worked for 16 hours, than if they distributed their rest and activity in any other way during the 24-hour period.

The differences in favor of sleeping immediately varied between 20 percent and 30 percent, according to the subject and the task. One would be justified in offering a bet of 100,000 to 1 that Mr. O’Brien’s results were not due to chance, Dr. Johnson said.

A new method of discovering what exists in the unexplored upper air beyond the reach of balloons, some 20 to 50 miles above the Earth, has been developed by three Washington physicists connected with the Carnegie Institution’s Department of Terrestrial Magnetism and the U.S. Department of Agriculture’s Bureau of Chemistry and Soils.

Searchlights will be used to shoot light into the night sky, light that is “fingerprinted” by being interrupted at a given frequency using a “light-chopper” so that when it is scattered by the upper air and picked up by large mirrors it can be recognized by tuning the observing instruments.

From what happens to the light in the upper air’s greatest unknown region will come the answers to some questions that science is eagerly asking.