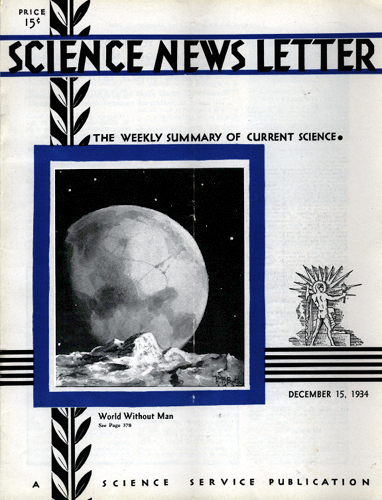 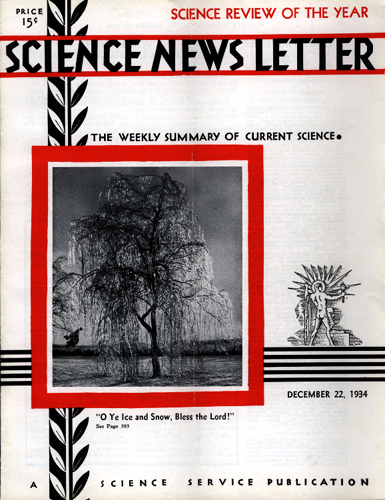 Astronomers now feel sure that if life exists on our neighbor planets, it is of the humblest kind.

The photograph on the front cover is of a painting of Mars as it might look viewed from Phobos, one of its moons, and is used through courtesy of the American Museum of Natural History.

After years of painstaking research, scientists have produced a new derivative of morphine in the course of experiments directed toward the discovery of a nonaddicting form of morphine.

Dihydrodesoxymorphine-D is the name of the new drug. It was made by Dr. Lyndon F. Small, University of Virginia research chemist. It is 10 times as effective as morphine in relieving pain.

Given as a substitute for morphine to persons addicted to the latter drug, the new product satisfied the cravings of the addicts and relieved the painful abstinence symptoms that follow withdrawal of morphine. This indicated that it also might be habit-forming.

Tests with monkeys and other animals indicate that these animals develop tolerance to the new drug as they do to morphine. It is not certain, however, that experiments on monkeys are a correct index of the new drug’s addiction or habit-forming property for man.

HUMAN BEHAVIOR TOO COMPLEX TO BE STUDIED STATISTICALLY

The behavior of a human child is too complex to express in a mathematical formula or to study by the use of the statistics, Dr. Paul Hanly Furfey, of the Catholic University of America, told members of the Society for Research in Child Development. The use of measurement and statistical analysis, probably the most representative technique now employed by American child psychologists, was condemned by Dr. Furfey as not being practically useful.

“Those who loyally follow the assumptions of the statistical method to its ultimate conclusion, calculating tetrad differences and fitting Pearson curves, are merely performing a sort of sacred rite, interesting and stimulating to themselves, perhaps, but without scientific significance,” Dr. Furfey declared.

ICE AND SNOW NOW SEEN AS CAUSES FOR REJOICING

Thus the seventieth verse of the third chapter of the Book of Daniel, in the Vulgate version. It is part of a long psalm, ascribed to the three young men miraculously delivered from the fiery furnace, a kind of Old Testament forerunner of St. Francis’ Canticle of the Sun.

Doubtless the three young men, after their rather trying experience, were glad enough to bid any and all forms of water—ice and snow, frost and dew, hail and rain—to give praise to their Deliverer. We also, having been delivered from the fiery furnace of last summer’s drought, might well feel equally glad to behold this winter’s ice and snow.

Even a naked tree, bearing a Christmas gift of glittering glaze, is richer than a sentimentally tinseled evergreen indoors. The ice may burden and even break the branches, but the ice is water, and water, we have acute cause to realize, is Life.

The beautiful photograph of a tree after an ice storm, its weeping branches coated with “glaze,” reproduced on the cover of this issue of the Science News Letter, is the work of John H. Cornwall III.

Outstanding 1934 achievements in 10 fields of science as selected by Science Service are: