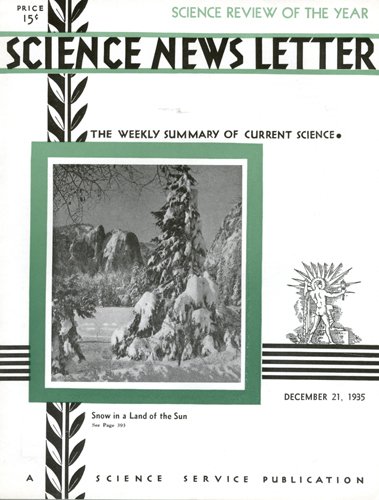 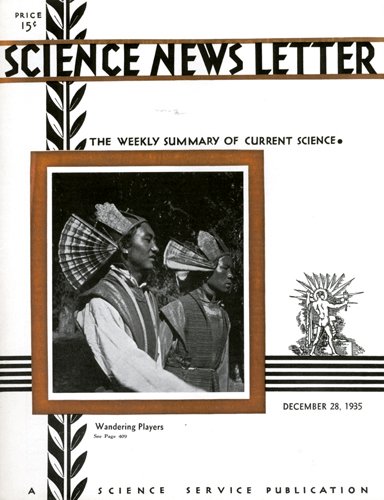 CALIFORNIA, LAND OF SUN, IS PROUD OF CHRISTMAS SNOWS

Snow and California would seem at first glimpse to be mutually irreconcilable ideas. Yet Californians are proud of the snows that fall in their state. And with right: saw you ever a lovelier Christmas landscape than this, in Yosemite National Park? These winter snows of the Yosemite, indeed, are not only beautiful in themselves; they are indispensable for the maintenance of the park’s summer beauty as well. The waterfalls that seem to drop from the sky itself, the firmament of flowers on the valley floor, the dark and awesome giant trees, are all the offspring of the white, brief glory of the snow.

Outstanding 1935 achievements in 10 fields of science as selected by Science Service are:

When the Cutting-Vernay American Museum Expedition visited Tibet’s second city, Shigate, they were greeted by a gathering of 3,500 lamas at a great lamasery. The party succeeded—after 5 years negotiations—in attaining its special aim of entering the sacred city of Lhasa to collect anthropological and botanical specimens. Mr. Suydam Cutting has returned with reports of scientific success and with fine photographic studies made by the expedition. The cover picture shows strolling players photographed in Lhasa. These men actors and dancers sometimes give performances lasting 3 days, the expedition found.