Entomologist Michael Raupp is enjoying Swarmageddon. The giant batch of cicadas began emerging from the ground in late April and will be heard in some northeastern states through June.

“You see the insects in a mad, desperate dash for the trees so they can survive and mate,” Raupp says. “Birds and squirrels will be eating them. It’s life, it’s death, it’s romance. It’s a massive display of Mother Nature’s wonder — in my opinion, at its best.”

Likewise, scientists get only so many chances to study each cohort, or brood, of cicadas. This particular cycle of 17-year cicadas is called Brood II and occurs from northern North Carolina to Connecticut and New York’s Hudson River Valley.

Raupp, a cicada expert at the University of Maryland in College Park, is tracking the emergence of cicadas in several locations in Maryland and New Jersey, adding to a growing database collected by scientists and citizens (see sidebar, right). He is watching the behaviors of immature cicadas, called nymphs, as they prepare to emerge from the soil and is also studying adults’ escape behaviors. Cicadas are not known for great predator-avoidance skills, perhaps relying on their infrequent appearances in huge numbers to sustain the species. “There’s safety in numbers,” Raupp says.

This year’s cicadas belong to the genus Magicicada, which includes broods emerging every 13 or 17 years. Cicadas spend most of their lives underground. There, immature forms called nymphs tap into the roots of trees and shrubs for sustenance — and possibly to eavesdrop on plant hormonal signals that betray the passage of seasons. When soil temperatures reach 64° F (about 18° C) in the year of emergence, the nymphs tunnel to the surface, climb the nearest tall object and molt into adults, living just two to four weeks and producing young that burrow into the soil to await a springtime more than a decade hence.

Raupp and others have found that the cicadas don’t cause significant harm to the plants they parasitize. “It’s a wonder that we don’t see more damage,” he says. But trees and shrubs do have a growth spurt the year after cicadas emerge (when feeding nymphs are especially small). That suggests root-slurping nymphs slow their hosts’ growth.

As for why people are captivated by an insect that spends more than 99 percent of its life cycle out of sight, Raupp says, “perhaps it’s the fascination of the abomination.” 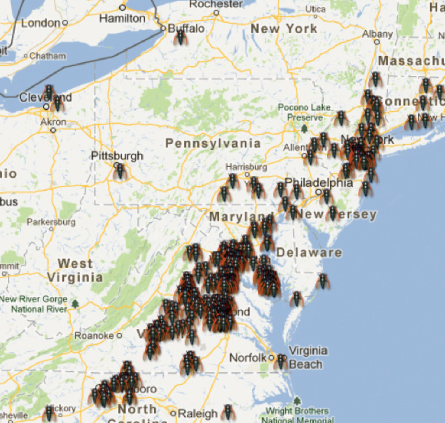 When colonists first encountered cicadas in America, the sudden swarms seemed a lot like plagues of locusts. Careful mapping later revealed that cicadas don’t move across the landscape in waves as locusts do, instead emerging in certain places on 13-year or 17-year cycles. As this year’s Brood II cicadas emerge, scientists are refining cicada maps, and you can help by reporting sightings at the Magicicada website, www.magicicada.org. Researchers will use the information to update maps of Brood II emergence in real time (sightings as of mid-May shown on map above). Analyzing the event will help scientists track the long-term health of forests and learn how cicadas might be responding to climate fluctuations. The first of this group appeared this year in North Carolina and Virginia. In New York’s Hudson River Valley, people might see — and hear — cicadas as late as July.