Sometimes extinction is just a fluke, a long-term experiment in evolution has shown.

Scientists captured an extinction in a bottle during a 27-year-long study in evolutionary biologist Richard Lenski’s lab at Michigan State University in East Lansing. Researchers there have been growing 12 flasks containing Escherichia coli bacteria. Those bacteria have been evolving for more than 60,000 generations.

In one of those flasks, called Ara-3, some of the bacteria evolved the ability to eat a chemical called citrate (SN: 1/31/09, p. 26; SN: 10/20/12, p. 8). For more than 10,000 generations, the citrate eaters, called Cit-plus, lived side-by-side with Cit-minus E. coli that couldn’t digest the chemical. But then sometime between generation 43,500 and 44,000, the Cit-minus bacteria disappeared from the flask. It looked like a clear-cut case of the citrate eaters outcompeting the bacteria that couldn’t digest citrate.

Instead, the extinction of the Cit-minus bacteria was a “random catastrophe,” Lenski and colleagues report July 19 in a paper posted online at bioRxiv.org.

“Even in this highly controlled lab setting, you have major evolutionary events being driven by external shocks to the system,” says Carl Bergstrom, an evolutionary biologist at the University of Washington in Seattle. If random chance can cause extinction in the lab, he says, “just think what could happen in a forest or an ocean.” 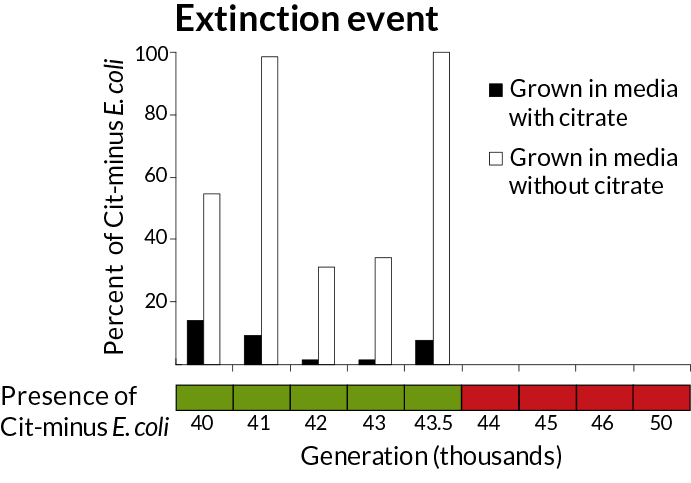 Usually evolutionary biologists can only speculate on the cause of an extinction, but Lenski’s group can replay evolution. Every 500 bacterial generations, the researchers freeze a sample from the flasks. Samples thawed from this frozen fossil record can be grown again to determine whether evolutionary events play out the same way.

Lenski’s team revived samples from generations 40,000 and 43,500, and reran the experiment 20 times each. The scientists thought that after 500 generations, Cit-minus bacteria from generation 43,500 would succumb to the more competitive Cit-plus bacteria. But the noncitrate eaters never went extinct in any of the replay experiments.

“Being able to compete an evolved strain against its ancestors is something we can’t usually do,” says Bergstrom. “We can’t go and compete Homo sapiens against Neandertals.”

What the catastrophe might have been is a matter of speculation. Perhaps soap residue in the flask or water problems may have finished off the noncitrate eaters, the team writes.

There’s almost no chance that the researchers just didn’t transfer any of the Cit-minus bacteria to a new flask one day, says Alan Hastings, a population biologist at the University of California, Davis. Lenski and colleagues calculate that there is one chance in 1043,700 of that happening. “They will never know what event did this,” Hastings says. But the results serve as a reminder that “events which may seem insignificant could have very large consequences.”

Scientists who study ecology and evolution have debated the role of random chance in determining the fate of species within an ecosystem, says Jonathan Losos, an evolutionary ecologist at Harvard University. Data are lacking on whether “some crazy event can come along and wipe out a species that is doing just fine,” he says. “General wisdom is that catastrophic events can finish off a species when it’s already in decline.” There is no evidence, though, that noncitrate eaters were in decline before they went extinct.

Lenski’s team has added a 13th flask to the experiment. This one is an “alternative history” flask that will allow both citrate eaters and noncitrate eaters from generation 43,000 to evolve without the catastrophic event to see what might happen next.

Editor’s note: This story was updated on August 26, 2015, to correct the generation at which the alternative history flask was started.