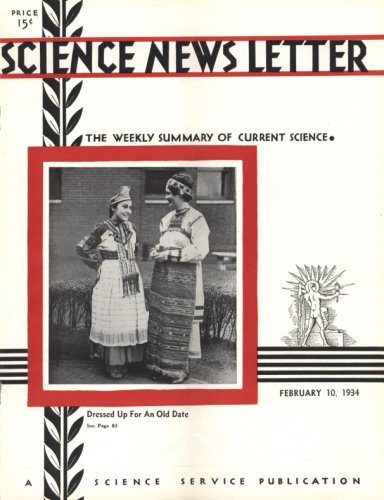 Rare archaeological books from the private library of the late Russian czar and Russian peasant costumes centuries old have been received by the University of Pennsylvania Museum.

About 125 of the czar’s books, mostly archaeological works, have come to the museum by an arrangement made with leading Soviet museums for exchange of material and scientific data.

Outstandingly magnificent is “The Byzantine Enamels of A.V. Zvenigorodsky,” which was printed in a limited edition in 1896, at a cost of about $1,000 a volume. Special paper was used, and artists and technicians worked for years on processes that would best reproduce the delicate shades and tints of the enamels. The binding is of white leather ornamented in Byzantine style, and cloth hand-woven from gold threads. Of the 200 copies printed, the first was presented to the czar and inscribed, “The Copy of His Majesty the Emperor.”

The Russian books have come to the museum through the courtesy of the State Hermitage Museum in Leningrad. The ethnological material, including the costumes, came from the State Central Anthropological Museum in Moscow.

The peasant costumes and jewelry and embroidered silks and linens are characteristic of those commonly in use in Russia several centuries ago. They are now virtually unobtainable. The front cover shows two costumes being “modeled” by University of Pennsylvania coeds.

Artificial radioactivity has been produced for the first time by Prof. F. Joliot and Mme. Irene Curie-Joliot, the famous Paris physicists who are husband and wife. Mme. Curie-Joliot is the daughter of the discoverers of radium.

Never before has radioactivity been created by an external cause.

This achievement has stirred interest at the famous Cavendish Laboratory, Cambridge, where experiments attempting confirmation are in progress. There is hope that through artificial radioactivity medically useful radiation will be produced.

The artificial radioactivity produced by the Joliots consists of obtaining positrons or positive electrons from bombardment of boron with alpha particles. The important fact is that the activity or disintegration produced continues for many minutes after the bombardment is stopped. Boron decays exponentially to 30 percent in 15 minutes. Similarly, artificial radioactivity proceeds in aluminum and magnesium. The decay period in aluminum is 4 minutes.