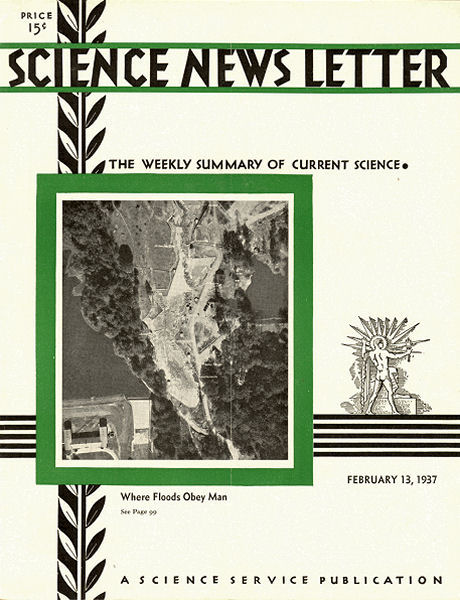 GREAT MODEL SHOWS ENGINEERS HOW TO PREPARE FOR FLOODS

High on the Vicksburg bluffs, overlooking the great, muddy inland sea that normally is the Mississippi River, stands the scientific laboratory that provides the nation’s best information on flood control and prevention. It is the U.S. Waterways Experiment Station of the Corps of Engineers of the U.S. Army.

The Army engineers learn much, naturally, from a superflood like that which now laps at their very feet, but experiments that cost hundreds of lives and hundreds of millions of dollars in property damage are not something to be intentionally made by man. Rather, experiments at the Army Engineers’ station pack 602 miles of the Mississippi River in a space only 1,100 feet long.

If the levees of the lower Mississippi River hold in the present crisis, much of the credit will go to the experiments that forecast their behavior.

By comparison with real life the model of the river seems tiny, but it is the largest structure of its kind ever used in the world. Most important of all, it is accurate to a high degree, and that is what provides its greatest engineering usefulness.

Director of the Waterways Station, F.H. Falkner, First Lieut., Corps of Engineers, states that the floods of 1927, for example, have been duplicated in every detail with the model.

A 1-ton machine that in a single action can solve nine simultaneous equations with nine unknowns so complicated in form they might well require days of laborious computation by trained mathematicians has been developed at the Massachusetts Institute of Technology.

Known as the simultaneous calculator, the machine is the product of 3 years’ research by Dr. John B. Wilbur of the department of civil engineering. Cooperating with him has been Dr. Vannevar Bush, vice-president of technology and dean of engineering, who under the Institute’s program to eliminate delay and complications in engineering and research, has previously made important contributions to the mechanical solution of mathematical problems, including the famous differential analyzer.

The simultaneous linear algebraic equations solved by the new machine occur constantly over a wide range of engineering and scientific analyses. Thus although the calculator was originally designed for the solution of problems in civil engineering, such as those involved in the construction of skyscrapers, it is expected to prove equally useful in such diverse fields as nuclear physics, geodetic surveying, genetics, and psychology. The mathematician will be able to use it for the evaluation of determinants especially and in several other fields, since the machine under some circumstances can solve for even more than nine unknowns.

The machine weighs approximately 2,000 pounds and has more than 13,000 separate parts, including 600 feet of flexible steel tape and almost 1,000 ball-bearing pulleys. The outgrowth of an experimental model built by Dr. Wilbur 2 years ago, the new machine has undergone exhaustive tests and is now in active operation.

The simultaneous equations that constitute the basis of the machine’s operation are mathematical expressions relating a number of unknown quantities in such a way that the value of each unknown may be determined by a simultaneous consideration of the relations involved as expressed by the equations.

In the design of a suspension bridge, for example, the stresses on each part depend on the stresses on other parts. In addition, each of these stresses depends on the physical elastic properties of the parts themselves. Yet the value of the stresses can be calculated by solving a set of simultaneous equations that show the relations between these various stresses.

In the usual analytical solution this process involves considerable laborious manipulation of the factors. With Dr. Wilbur’s new machine, however, it is necessary only to set a series of tilting plates to account for the various coefficients and constants, and a single movement of the mechanism mechanically performs in a few seconds computations that might take days by ordinary methods.

Construction was made possible by a fund established by Sir Douglas Alexander of New York City.