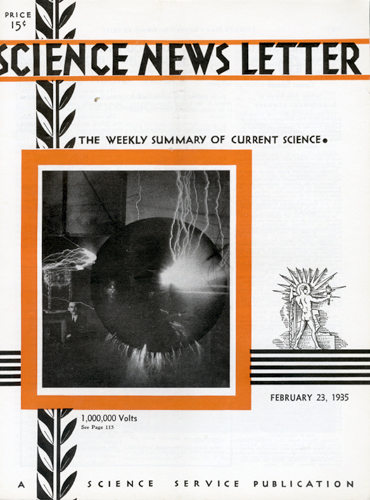 A new type of atom “gun,” hurling electrified particle “bullets” at atoms, which should speed vital research on how matter is put together, has just been completed, it has been announced by the department of physics of Ohio State University.

So huge is the M.I.T. generator that it is housed in an airplane hangar in Massachusetts. The Ohio State device, capable of reaching voltages of a million volts, is small enough to go into a normal science laboratory. The trick is to mount the apparatus horizontally, on its side, instead of having it towering high in the air.

The million-and-more volts created with the device are being used to drive electric particles against matter and break it apart. In the debris of destruction, science learns how the basic units of all matter—the atoms and electrons—are joined and studies the forces that hold them together.

The photograph on the front cover of this week’s Science News Letter shows the flashing sparks from the generator. The picture is a double exposure; the man moved from beside the device before the “lightning” flashed.

X-rays generated in the sun bombard the Earth incessantly, Dr. Ernst A.W. Müller of the Siemens and Halske Company has discovered as the result of a study of the electrified radio “roofs” of the Earth’s atmosphere.

Unlike the sun’s light and heat, the solar X-rays or Roentgen radiations do not reach the solid crust of the Earth. They are absorbed by the upper atmosphere down to a height of about 65 miles, where they electrify the air and create what is known as the Kennelly-Heaviside layer. This E layer, as it is also called, is the lowest of a number of the Earth’s electrified roofs that keep radio waves from being lost in interplanetary space. It reflects the longer radio waves. (Nature, Feb. 2)

The solar X-rays are thought by Dr. Müller to be more penetrating or softer than the ultraviolet radiations known also to come from the sun. They are “soft” X-rays, having a wavelength around 100 millionths, or one billionth, of an inch.

A “popcorn” method of crushing mineral ores, wherein the ground rock blows itself apart by internal explosion, was described by R.S. Dean of the division of metallurgy, U.S. Bureau of Mines, before the meeting of the American Institute of Mining and Metallurgical Engineers.

In a process quite like that used in making the familiar “puffed grain” cereal breakfast foods, ore is placed in a strong container and steam at from 150 to 250 pounds pressure forced into it. The high-pressure steam seeps through cracks and crevices of the ore.

Suddenly, a valve is opened and the pent-up steam escapes. Steam imprisoned within the ore particles exerts such force on its way to freedom that it blows the ore apart.

So cheap is the method of crushing by steam explosion that a ton of ground ore can be crushed for a power cost of 1.6 cents. This is less than one-fifth present crushing costs.