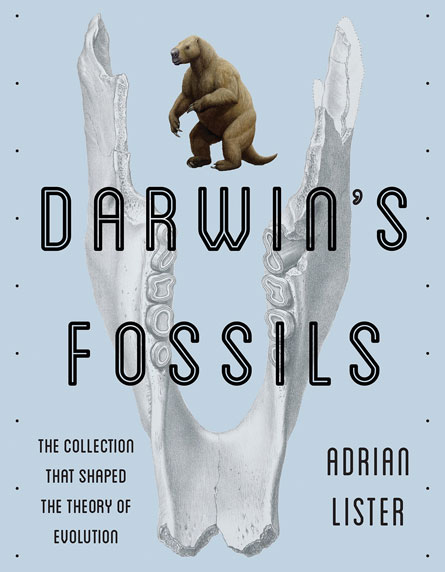 Charles Darwin famously derived his theory of evolution from observations he made of species and their geographic distributions during his five-year voyage around the world on the H.M.S. Beagle. But in the introduction of On the Origin of Species, the naturalist also cites another influence: the thousands of fossils that he collected on that trip. Darwin’s Fossils is paleobiologist Adrian Lister’s account of that little-appreciated foundation of evolutionary theory.

While sailors on board the Beagle charted the coastal waters of South America (the actual purpose of the expedition), Darwin explored the shore and rambled inland on excursions that sometimes lasted weeks. The fossils he unearthed — some relatively fresh, others millions of years old — have tremendous significance in the history of science, Lister contends.

Many of the species Darwin discovered in the fossils were previously unknown to science, including several giant ground sloths, compact car–sized relatives of armadillos called glyptodonts (SN Online: 2/22/16) and ancient kin of horses and elephants. Because many of those animals were apparently extinct — but just as apparently related to species still living in the region — Darwin concluded the fossils were strong evidence for the “transmutation,” or evolution, of species. This evidence was all the more convincing to him, Lister suggests, because he had unearthed the fossils himself. He saw firsthand the fossils’ geologic context, which enabled him to more easily infer how species had changed through time.

Copiously illustrated and suitable for general readers as well as the science savvy, Darwin’s Fossils is a quick, easy read that provides a fascinating overview of the naturalist’s wide-ranging fieldwork during the Beagle voyage. His insights from fossils went beyond just biological evolution. Darwin’s studies of coral reefs (the mineralized parts of which are, after all, huge fossils) encircling islands in the Pacific and Indian oceans led him to theorize correctly how such reefs form. And his observations of strata containing marine fossils thousands of meters up into the Andes led to an improved understanding of how geologic forces sculpt the world.