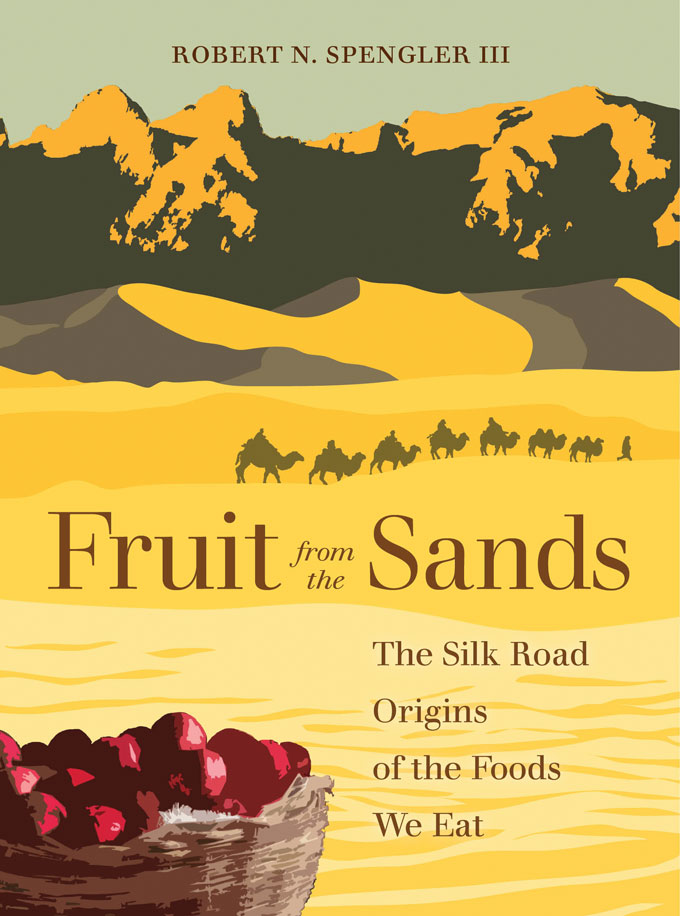 Many popular foods can be traced back to trade caravans and herding groups that turned Central Asia into a hub of globalization several thousand years ago. In Fruit from the Sands, archaeobotanist Robert Spengler, who studies how people used plants in the past, surveys evidence suggesting that the ancient Silk Road was the conduit for dispersing much of what is now munched and sipped. Edibles with a Silk Road pedigree include almonds, apples, grapes, peaches, rice and wheat.

To understand how this food distribution process worked, readers must first discard romantic notions about the Silk Road, Spengler explains. The name is misleading: The Silk Road wasn’t a road and didn’t primarily transport silk. Instead, archaeological evidence indicates that the Silk Road encompassed a network of trade routes radiating out from Central Asia that connected China to the Mediterranean. Silk Road exchanges of commodities and cultural practices, such as metalworking and horseback riding, began about 5,000 years ago.

Grains were among the most important products to travel those ancient routes. Excavations led by Spengler of two herders’ camps in Kazakhstan indicate that grain movements began more than 4,000 years ago. Graves at those sites contain seeds of both wheat and broomcorn millet (SN: 5/3/14, p. 15). Grain crops carried back and forth on the Silk Road transformed societies, Spengler argues. Wheat from the Fertile Crescent in Southwest Asia spread into China along the foothills of Central Asian mountains, plant remains from an increasing number of sites suggest. The grain put a new spin on rice-based East Asian cuisine, adding noodles, dumplings and steamed buns made from wheat flour to the menu. Wheat became the winter crop of Chinese dynasties starting about 2,000 years ago.

Traders and travelers carried broomcorn millet out of China via the same route. This hardy, easy-to-cultivate crop fed farmers, herders and laborers who built states across Europe and parts of Asia. With the introduction of irrigation systems about 2,500 years ago, millet could be farmed year-round. It was the crop, Spengler writes, “that turned the chariot wheels of the Roman Empire and fed Eastern Europe.” Today, broomcorn millet serves mainly as bird food in Western Europe and the United States.

Rice has fared much better on the world stage despite being a late bloomer. This crop’s Silk Road journeys were a long time coming after its domestication in East Asia 6,000 or so years ago (SN: 7/8/17, p. 20). Spengler cites genetic and archaeological data suggesting that rice became an important crop west of the Indus Valley only after Islamic conquests about 1,500 years ago.

Apples also got their big break on the Silk Road. Genetic studies have traced the domesticated version of this fruit back several thousand years to a few Central Asian river valleys in what is now Kazakhstan. Silk Road traders rapidly transported domesticated apples westward. Hybridization of the fruit with wild crabapples occurred along the way, and now apples are grown on every continent except Antarctica. Tea’s worldwide popularity also flowed from a humble start. Chinese merchants supplied high-altitude Silk Road trading towns with tea and other items by about 1,800 years ago; a few hundred years later, the Chinese traded dried bricks of tea in exchange for Tibetan horses.

Overall, Spengler tells a fascinating tale of a culinary past that is just beginning to come into focus. Perhaps a follow-up volume could delve into what life was like for traders and herders on the Silk Road. For now, though, Spengler’s book provides lots of food for thought.

Buy Fruit from the Sands from Amazon.com. Science News is a participant in the Amazon Services LLC Associates Program. Please see our FAQ for more details.