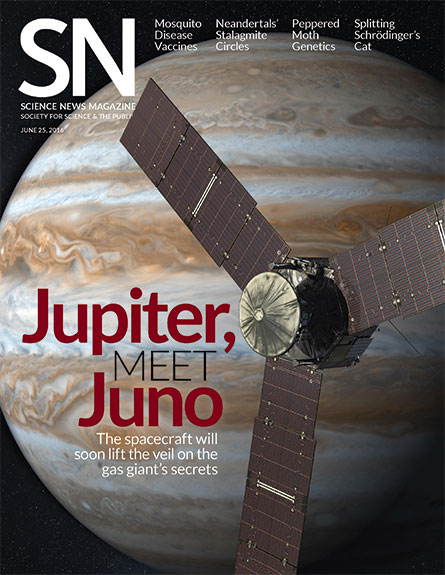 In “Earth is young at heart” (SN: 6/25/16, p. 5), Emily Conover reported that Earth’s core is more than two years younger than the planet’s surface, according to new calculations. Thanks to the effect of gravity on the passage of time, a clock placed at Earth’s core will tick fractions of a second slower than a clock at the surface. After 4.5 billion years, all of that different ticking adds up to 2.5 years.

“ ‘Earth is young at heart’ has got me feeling upside down! Wouldn’t gravity at Earth’s center be zero, not max?” asked reader Pete Caruso. “Sure, the center of the Earth is its center of gravity, but wouldn’t it also be the place where the mass surrounding that point would be more or less equal in all directions … resulting in a ‘zero gravity’ condition?”

Gravitational potential measures the work needed to move against gravity from one place to another, she says. Although gravitational force is weaker near Earth’s center, the gravitational potential difference is larger. “If you imagine going deeper and deeper into the center of Earth, it would keep getting harder to climb all the way back to the surface,” Conover says. “That means clocks will run slower down there, and the Earth will be slightly younger at its core, due to general relativity.”

Call of the whale

Over the last decade, the frequency of one portion of pygmy blue whales’ calls has been steadily dropping — a change in sound similar to that experienced by a teenage boy during puberty. Researchers aren’t sure why calls are getting deeper, but it may be to attract mates or may be learned from other whales, Meghan Rosen reported in “Pygmy blue whale ‘moans’ deepen” (SN: 6/25/16, p. 13).

The imaginary cat from Erwin Schrödinger’s famous thought experiment has been split in two — now existing in a living-dead state in two boxes at once. Scientists forced microwaves into mimicking this quantum behavior, which may have benefits for quantum computing, Emily Conover reported in “Schrödinger’s cat in two boxes at once” (SN: 6/25/16, p. 9). One reader on Facebook o­ffered this feline-related quip:

Someone needs to design a Schrödinger’s litter box that exists in a quantum state of cleanliness.

“Consider the temperatures of the waters in which the calls are being made,” online reader Scott Hancock wrote. “Water temperatures are growing warmer, both at the surface and at depths, affecting acoustics and transmission qualities over larger areas.”

Temperature doesn’t explain the deeper calls, says Jennifer Miksis-Olds, a marine bioacoustician at the University of New Hampshire in Durham. “Surface waters are warming, which impacts the sound speed profile of the water column,” she says. But “the deep ocean water where our sensors are has remained constant.” Although the whales vocalize closer to the ocean surface where waters are warmer, researchers found that temperature did not contribute to the observed decrease. What’s more, “water temperature would have a greater impact at much higher fr-equencies than the 100 [hertz] calls we are looking at,” Miksis-Olds says.

Simulations covering Earth’s birth about 4.5 billion years ago to 10 billion years in the future suggest that plate tectonics is a midpoint in the planet’s progression between two stagnant states, Thomas Sumner reported in “Plate tectonics could grind to a halt” (SN: 6/25/16, p. 8).

“I am just curious why [the researchers] bothered to run their tectonic simulation 10 billion years into the future, when in about 5 billion years the Earth is likely to be vaporized when our sun completes core hydrogen burning and becomes a red giant?” Sid Parsons wrote.

“This work doesn’t just apply to Earth, but to other planets as well,” Sumner says. Some scientists think Venus, currently a stagnant planet, could hypothetically one day have plate tectonics under the right conditions. The new findings could also help researchers studying planets beyond our solar system. “Understanding how long an exoplanet could stay in a certain tectonic regime could help us better understand the potential conditions for alien life,” Sumner says.