Global carbon dioxide emissions are expected to hit a record high in 2018, despite urgent calls from climate scientists and international groups such as the United Nations to cut back.

Worldwide, fossil fuel use is projected to pump 2.7 percent more CO2 into the atmosphere in 2018 compared with 2017. Last year, such emissions contributed 9.9 gigatons of carbon. The data are presented in the Global Carbon Budget published online December 5 in Earth System Science Data. 2018 marks the second year in a row that the emissions, which fuel global warming, have risen substantially after a lull from 2014 to 2016.

The news comes on the heels of the Fourth National Climate Assessment, which projects dire economic, environmental and public health consequences in the United States if the country doesn’t curb its CO2 emissions substantially (SN Online: 11/28/18). The United States is the largest per capita CO2 emitter worldwide, releasing 4.4 metric tons of carbon per person in 2017, according to the Global Carbon Budget. Total U.S. fossil fuel CO2 emissions are projected to have grown 2.5 percent in 2018, despite the United States using more renewable energy than ever before. (The report uses data available as of early November to predict emissions for the whole year.)

China and India have seen particularly large increases in carbon dioxide emissions from fossil fuel use in recent years, and 2018 continues that trend (left). But the United States continues to rank well above other countries for the per person amount of such carbon emitted each year (right).

Trends in carbon dioxide emissions by country and per capita

China and India have seen particularly large increases in carbon dioxide emissions from fossil fuel use in recent years, and 2018 continues that trend (top). But the United States continues to rank well above other countries for the per person amount of such carbon emitted each year (bottom). 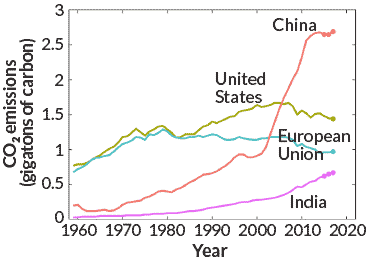 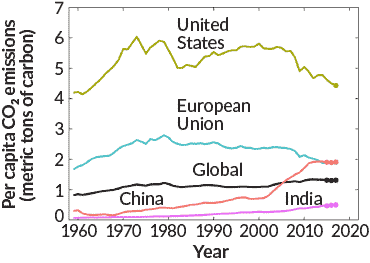 Overall, India will see the biggest increase in fossil fuel CO2 emissions in 2018 — 6.3 percent over 2017. That’s due in part to rapid economic growth and efforts to bring electricity to people living in rural communities. Per capita, India’s emissions are still below the global average.

Meanwhile, in China, the largest overall carbon emitter, that number will rise 4.7 percent in 2018. Both India and China are making attempts to shift away from coal as an energy source. In contrast, the European Union will cut its emissions by 0.7 percent in 2018 thanks to substantial investments in renewable energy.