A group of astronauts-cum-repairmen bid a final adieu to the Hubble Space Telescope at 8:57 a.m. EDT on May 19. Using the robotic arm on the space shuttle Atlantis (shown above), Megan McArthur lifted Hubble high above the shuttle’s cargo bay and released it. Thirty-one minutes later, Atlantis fired its thrusters to increase its separation from Hubble.

Five space walks had been the last servicing call for the 19-year-old orbiting observatory. The 11-day servicing mission, scheduled to return astronauts to Earth on May 22, almost never happened. NASA canceled the mission early in 2004 after the Columbia shuttle disaster only to reinstate the trip under a new administrator and after public outcry. 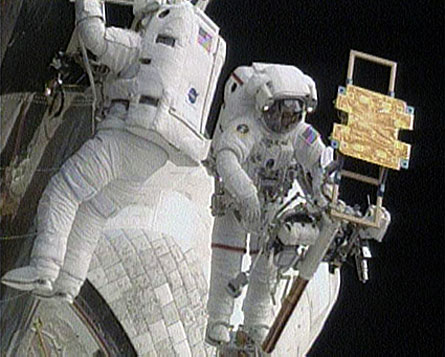 05/18/2009 – Final walk
Astronauts Andrew Feustel (left) and John Grunsfeld began a space walk May 18 that is the last in the series of walks that is part of the final repair mission the space shuttle Atlantis will make to the Hubble Space Telescope. 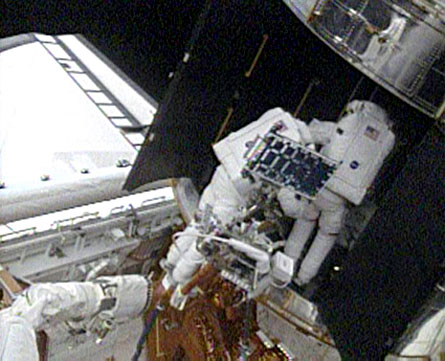 05/17/2009 – Team space walk
Astronauts Mike Massimino and Mike Good are seen here May 17 on a space walk to repair the Space Telescope Imaging Spectrograph, which was installed on the Hubble Space Telescope in 1997 and stopped working in 2004. The astronauts’ space walk is one of several this week as part of the final repair visit the space shuttle Atlantis is making to Hubble.

On May 16, shuttle astronauts John Grunsfeld and Andrew Feustel completed the third spacewalk to service the aging orbiting observatory. During their venture, which took just over 6&frac12; hours, the astronauts removed the Corrective Optics Space Telescope Axial Replacement, which for several years had acted as a pair of corrective eyeglasses compensating for the Hubble’s infamously flawed primary mirror. The device is no longer needed because corrective optics are now built into each new Hubble instrument. 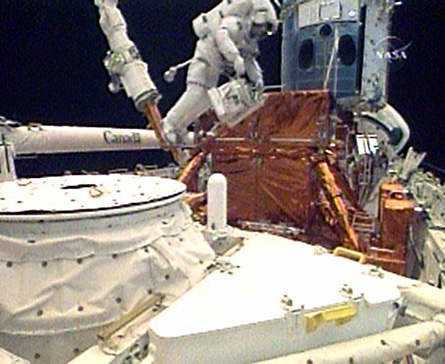 05/15/2009 – Second space walk
Astronaut Mike Good rides on the robotic arm of the space shuttle Atlantis May 15 (read more). His space walk is the second of five scheduled walks needed to carry out the final repair mission to the Hubble Space Telescope. 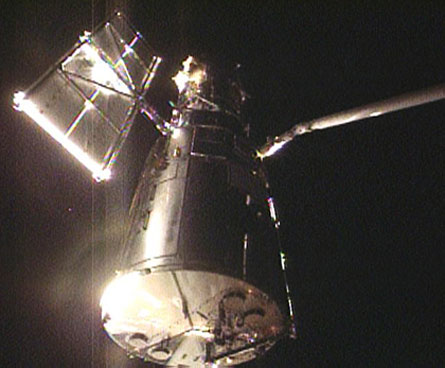 05/13/2009 – A hold on Hubble
Astronauts aboard the space shuttle Atlantis used a robotic arm (right side of image) to grab hold of the Hubble Space Telescope at 1:14 p.m. EDT on May 13. The telescope will be latched to a Flight Support System device for the duration of what will be the final and most complex servicing of the 19-year-old orbiting observatory. The shuttle crew is scheduled to perform on May 14 the first of five spacewalks for the repair mission. 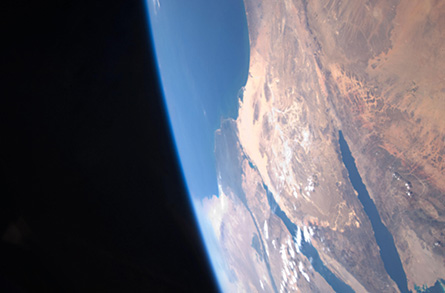 05/12/2009 – Big picture
Space shuttle crew members took this photo May 12. The shuttle Atlantis launched May 11 to begin the final and most ambitious repair mission to the Hubble Space Telescope.

Loosening a half-inch screw may not sound like a job for a rocket scientist.

But now imagine performing that task 32 times with your hand inside a pressurized glove so stiff it’s hard to bend your fingers, let alone grab a screwdriver. Now try holding on to the screwdriver in your gloved hand but while you’re floating in space. One additional obstacle: A strut blocks direct access to the screws.

That’s just one of the challenges facing the crew of the space shuttle Atlantis, set to pay a final servicing call to the most celebrated observatory in history—the Hubble Space Telescope.