For the sake of science, Olav Oftedal has milked bats, bears and a lot of other mammals. But a naked mole-rat was something new.

“The thin, hairless skin is so translucent that you can see the milk accumulating in the mammary glands,” says Oftedal, of the Smithsonian Environmental Research Center in Edgewater, Md. For once he could tell exactly which glands were full.

“In most small mammals,” he says, “the big problem is you have hair that can wick the milk away. You have a capillary tube, and you’re trying to catch the milk so it can’t touch any hair.” Naked mole-rats, though, are helpfully hairless.

Oftedal collected milk from the queens of Heterocephalus glaber colonies at the Smithsonian’s National Zoo. In colonies of dozens or hundreds of mole-rats, only the queen reproduces. 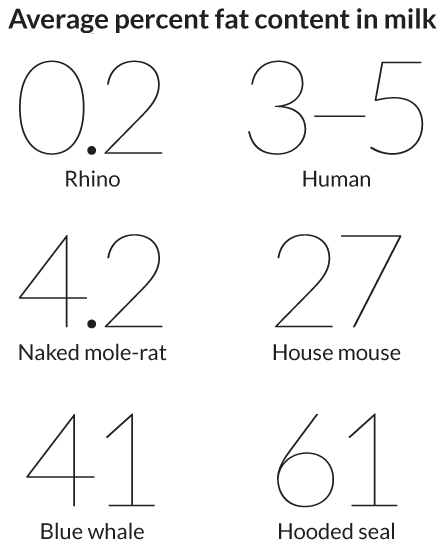 The species is one of very few mammals that live in large, extremely social groups, much like honeybees, with a queen producing and nursing all the young. A colony’s top female can have more than 900 offspring in a lifetime and meets their nursing needs by producing about half of her body weight in milk each day.

Just what’s in that milk intrigued Oftedal and Wendy Hood of Auburn University in Alabama, who studies milk in all its variety. (Rhinos have virtually fat-free milk, and some seal milks top 60 percent in fat content. That means the milk is something like four times richer than Ben & Jerry’s ice cream, she says.)

When Hood got the milk samples, no, she didn’t take a sip out of curiosity. “If I were to taste it, that would be that much less we’d have to analyze,” she says.

The milk turned out to be remarkably watery for a rodent: 83 percent water versus 59 percent for the house mouse, the team reported March 13 in the Journal of Zoology. It was also low in fat content: about 4.2 percent, far skinnier than house mouse milk at 27 percent fat.

Naked mole-rats live in hot arid places, so Hood proposes that the extra water may be needed to keep young hydrated. As unusual as naked mole-rat milk is for a rodent, in both fat and water content it’s close to cow’s milk and human breast milk.