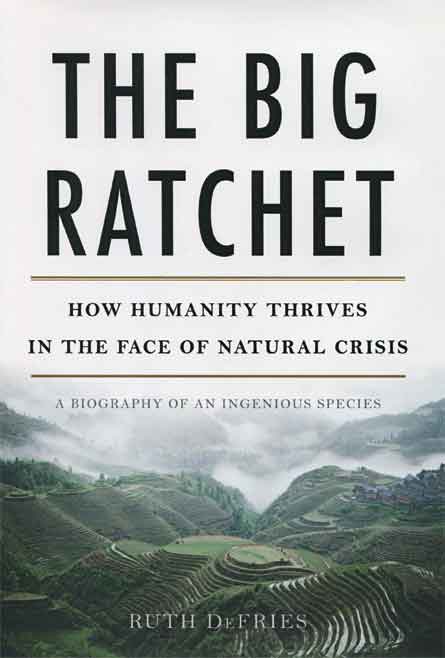 The second half of the 20th century witnessed “the Big Ratchet.” That’s what DeFries, an environmental geographer at Columbia University, calls the massive surge in food production that accompanied the world’s skyrocketing population growth. Her book looks back much further to survey the technological innovations that transformed humans from nomadic hunter-gatherers threatened with starvation into farmers and then into urban-dwelling specialists whose sustenance is usually produced far away by a relative few.

This evolution has been fraught with ups and downs: More food leads to more humans, more humans leads to scarcity and scarcity forces the invention of new ways to cope. DeFries sums up the cycle in the pithy catchphrase “ratchet, hatchet, pivot.”

As she details, the road to food abundance is littered with unintended consequences of what seemed like good ideas at the time. DDT wipes out insect pests but can wreak havoc on wildlife. Fertilizer improves crop yields, but nutrients in runoff can cause algal blooms. But for DeFries, such overshots are opportunities to regroup and excel. Her writing percolates with a bubbly optimism as she recounts the “extraordinary” pivots humans have found to “hijack nature to feed ourselves.”

The phrase “natural crisis” in the book’s subtitle is puzzling since most of the crises that DeFries presents are environmental disasters, which is to say, human-made. In scanning all of human history, she largely ignores how geopolitics, ignorance and greed trigger or exacerbate such disasters. Meanwhile, she chides the shortsightedness of both doomsayers and Pollyannas who “fail to grasp that there is no endpoint to this interplay between human ingenuity and nature.” Still, even DeFries concedes that it’s just a matter of time before a mighty hatchet falls. “New pivots,” she writes, “enabling us to sidestep the blow are far from assured.”