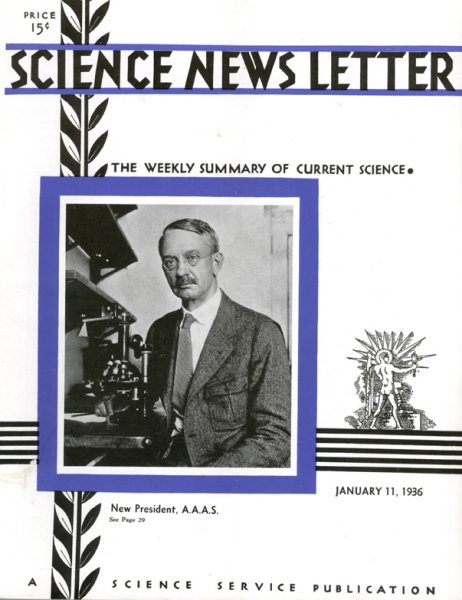 Prof. Edwin Grant Conklin, one of America’s leading biologists and long a professor at Princeton University, was elected president of the American Association for the Advancement of Science. Dr. Conklin in being elected to this high scientific office succeeds Dr. Karl T. Compton, president of the Massachusetts Institute of Technology, and he will preside during 1936 and deliver the principal address of the 1937 Christmas meeting.

EVIDENCE FOR EXISTENCE OF NEUTRINO PRESENTED

Experimental evidence for the existence of the “neutrino”—postulated but never-found new atomic particle—was presented by Dr. Kenneth T. Bainbridge of Harvard University to the American Physical Society.

In 1932 Prof. James Chadwick of Cavendish Laboratory, England, discovered that atom nuclei also contained the neutron which, as the name suggests, is neutrally charged in the electrical sense. Prof. Chadwick won the 1935 Nobel Prize in Physics for this discovery.

More recently, a number of the scientists have postulated the existence of the neutrino, or little neutron, in order to explain certain products produced in artificial radioactive transmutation of the elements.

Working from known facts and with known theories it can be shown, for example, that certain isotopes can exist only if the neutrino is a fact instead of a mathematical abstraction. The search for such isotopes would, then, constitute a test for the existence of the neutrino.

The experimental technique is an indirect one, naturally. It is about like saying that all living bodies must contain hearts and if you can find a living body you have evidence for a heart inside it, even though you may not be able to see the heart itself.

Growing plants act like electric batteries, developing small electric potentials. These are measurable in only a few score millivolts at most. A millivolt is a thousandth of a volt. Ordinary house current is usually 110 volts; an automobile battery develops 6 volts.

Various aspects of this electrical activity of living things were discussed at the meeting of the American Association for the Advancement of Science in St. Louis by a number of speakers. Dr. E.J. Lund of the University of Texas told of extremely minute measurements of the electric potentials on individual cells which show that there are differences in voltage even between points only a microscopic distance apart. S.O. Brown, also of the University of Texas, told of measuring the potentials on Chara, a common water-weed. He found, among other things, that merely touching the tip of the plant will call forth electrical changes in it. Another University of Texas investigator, S.S. Wilks, reported on electrical potentials in the first green shoot that comes from the sprouting oat seed.

If the end of a scarlet runner bean stalk is cut off, and the buds farther down thus induced to start growth into branches, there is a decided decrease in the potential of the joints above such buds, W.S. Rehm of Chicago reported. The potential may even be reversed, from negative to positive. Even a mechanical push against a leaf will cause such an electrical change, at least momentarily.

These bioelectrical potentials can be increased by applying an increase in the pressure of oxygen to which they are exposed, Dr. G. Marsh of the State University of Iowa reported. On onion root tips there is an increase of potential with increase of oxygen pressure, up to about 30 atmospheres, but beyond this point a decrease sets in. Similar results were obtained with a frog’s skin, but the critical pressure in this case was 63 atmospheres.