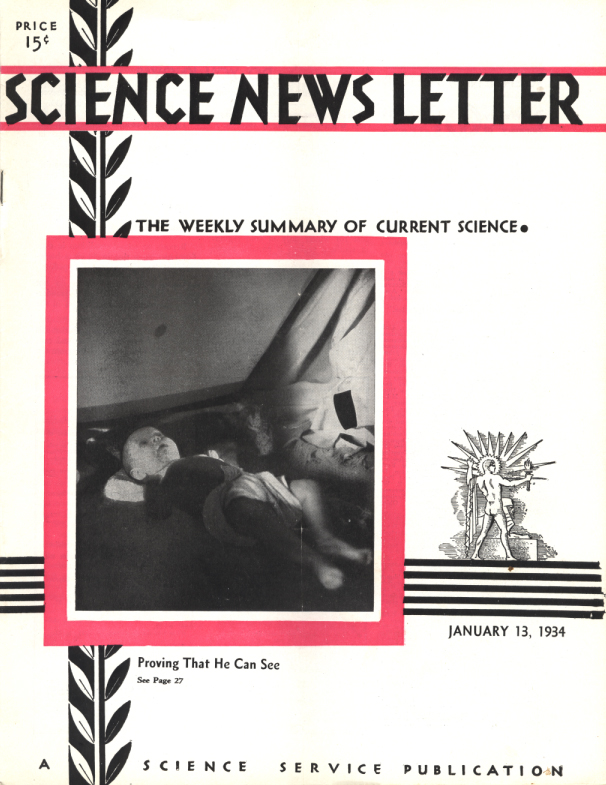 PROVING THAT BABY CAN SEE

This is often the first question asked by the young mother when she looks at the depths of solemn mystery in the eyes of her newborn baby.

The answer has heretofore always been “No.”

Until now, it has been generally thought that the young infant comes into this world as blind to its beauties as a young kitten. The experienced mother of a brood would tell you that he could not possibly see, because the bright-colored bauble dangled before his eyes brought no response from the drowsy baby.

The anatomist would cite for you rules to prove that it would be physically impossible for the infant to see. The eye is not sufficiently developed at birth, he would say with an air of finality.

It remained for a skeptical psychologist, Dr. W.C. Beasley, of the Johns Hopkins University, to answer, “Well, suppose we examine the babies and test their eyesight. Let’s forget all the rules and find out whether they do see.”

As a result, he was rewarded by a surprising upset to theory. Babies’ eyes can see!

A means of quickly reversing the deep unconsciousness caused by ether and other anesthetics and, in some cases, of bringing back from the brink of death overanesthetized patients, was announced to the American Association for the Advancement of Science by Dr. Walter V. MacGilvra, a dental surgeon of the Harvard dental school, after experiments in which the Harvard medical and dental faculties have cooperated.

A “shot” of weak hydrochloric acid injected directly into the blood is the agent that has been found effective in recalling and restoring to sensibility patients who would otherwise sleep for hours, and in some cases would never awake.

Full feeding means shorter life. If you would have many days upon the Earth, be abstemious.

This would seem to be the conclusion to be drawn from experiments on laboratory animals, reported to the American Association for the Advancement of Science by Dr. Clive M. McCay and Miss Mary F. Crowell of Cornell University.

Dr. McCay and Miss Crowell used 106 rats in their research. They divided the animals into approximately equal groups. All were fed diets qualitatively complete.

“Two groups were retarded in growth by inadequate calories only, while the third group matured rapidly with ample calories,” the experimenters reported. “This experiment is in progress and in its fourth year, but the results are conclusive in showing that the animals that mature slowly have a much greater life span than the rapidly growing ones.

“This extension of the life span by means of retarded growth indicates that the potential life span for a given species is much longer than has been anticipated. Furthermore, these data suggest that the longer life span of the female may be related to the slower growth rate of the female sex as the animal approaches maturity.”