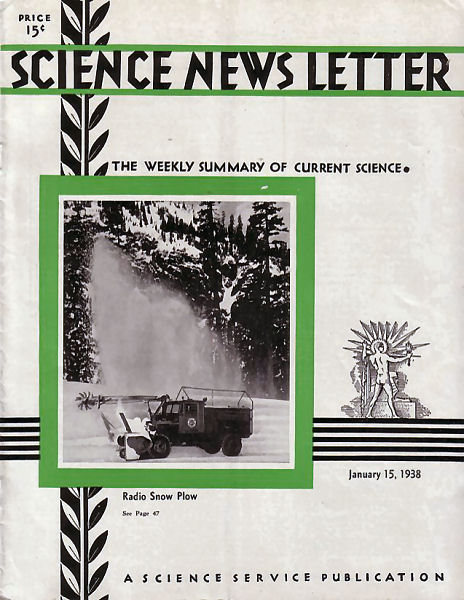 RADIO IS LATEST AID IN BATTLE AGAINST SNOW

Radio is the latest innovation in the battle between science and snow. Twenty fixed radio stations and 16 portable units are being operated by the Washington State Department of Highways at Olympia in the effort to keep winter traffic on the move.

Because plowing must be carried on in remote mountain regions where wire communication is unavailable or unreliable, all rotary plows have been equipped with two-way radio installations in order that they may keep in constant touch with the maintenance offices of the highway department, receiving instructions and broadcasting weather reports or calls for help. Shop clerks and plowmen are licensed radio operators.

The radio-equipped plow sends word of weather and road conditions at regular intervals, and the base stations, open every minute of the day and night, keep close check on the snow situation throughout the entire state.

Maps are kept to show the location of all snow-fighting apparatus and the progress of storms and removal operations. Trucks equipped with shortwave receiving sets pick up these reports and alter their scheduled runs accordingly, while the general motoring public is informed of snow conditions by regular broadcasting stations which relay messages from the plows.

Since modern winter warfare on the highways has come to be a matter of keeping ahead of the storm, radio communication makes possible rapid concentration of equipment where it is most needed.

Plows which were formerly stranded for days in deep mountain passes can now call for additional supplies and equipment, thus saving time and money and increasing their effectiveness. Dangerous snow slides reported to headquarters permit greater safety for winter travelers, and many marooned motorists can be rescued by radio.

The radio equipped plows are powerful Diesel trucks with four-wheel drives, having auger-type rotary units which hurl the snow into the air and back from the highway as far as 150 feet. In bad seasons they operate continually. A small truck travels back and forth from the plow, bringing Diesel oil, supplies, and transporting the operators.

In the illustration on the front cover of this week’s Science News Letter, Washington’s Diesel Snogo, Station KGHA, radios to headquarters that Snoqualmie Pass is open to traffic. Note the triangular antenna installed over the engine, back of the driver’s cab, and the “wall comber” projecting ahead of the rotary equipment to knock down overhanging snow walls.

MASS OF NEW X-PARTICLES MAY HAVE A WIDE RANGE

The mass of the new-found “X” particle which scientists have been discovering in cosmic ray research may not have a fixed value, says Dr. Seth H. Neddermeyer of the California Institute of Technology (Physical Review, Jan. 1).

Dr. Neddermeyer is a colleague of Dr. Carl Anderson and worked with him when the latter made the discovery of the positron for which he received the Nobel Prize award. The team of Anderson and Neddermeyer, too, made the initial discoveries of the “X” particle, whose mass appears to be intermediate between that of the electron and the proton.

“There are . . . reasons for believing that the mass (of the X particle) may not be unique and that many masses, ranging from a few times the electron mass up to very large values, may exist,” says Dr. Neddermeyer’s report, in part.

By theory, explains Dr. Neddermeyer, photons of radiant energy create pairs of particles—positive and negative in electrical sign—in their rush through the atmosphere on their way to Earth. The energy and mass possessed by these new particles, which are the offspring of dying photons, are variable, postulates Dr. Neddermeyer. Thus many different masses might be observed, depending on the energy possessed by the original photon that creates them.

The point is that particles can have two kinds of mass; the so-called rest mass and a mass due to motion. Theoretically, at least, a particle moving with the speed of light should have an infinitely large mass.

The second kind of mass, which varies with the speed of the particle, was observed in the present experiments.

Tusks scattered on the frozen shore of Siberia opposite Alaska may mean that Soviet scientists will some day add more complete specimens of the extinct hairy mammoth to the two bodies already found, Tass, Soviet news agency, reported.

Detailed information on the body, the second one to be found, reached Moscow. It revealed that this hairy mammoth, as it existed thousands of years ago, was in the neighborhood of 18 feet long, had a trunk more than 9 feet long and hair more than 3 inches long.

Like the first specimen found, the second body, which was uncovered last October, was partially damaged by wild animals. The head, one leg, and a part of the trunk have been partly eaten away. Otherwise, the body is intact, preserved through the ages in the frozen earth of the north, as effective an icebox as man has devised.

The tusks of the specimen found have not yet been located, but they may be under its body, which has not yet been removed from the pebbly ground. Next spring, when the sea in this area is clear of ice, soundings of the coastal zone will be taken to see if a ship can approach the shore to take on board the find.