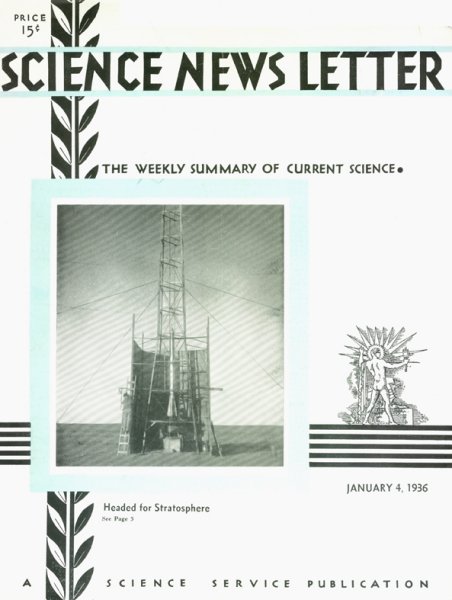 Experimental rocket flight to altitudes of 7,500 feet, with speeds up to 700 miles an hour, were reported by Prof. Robert Goddard of Clark University to the meeting of the American Association for the Advancement of Science.

Motion pictures of his rockets in actual flight were shown by Prof. Goddard, and gathered scientists witnessed on the screen of some of the tests which Col. Charles A. Lindbergh and Harry F. Guggenheim saw last September at Roswell, N.M.

The experimental flights, based on 5 years of research, are designed to provide science with a mechanism for probing the stratosphere beyond the reach of balloons, either manned or without human pilots. Flights to the moon and other astronomical objects have never been considered by Prof. Goddard as a crucial goal in his experiments.

Discovery of a bacteriophage or “germ-eater,” for the bacillus that causes tuberculosis has been reported by William Steenken, a young bacteriologist at Trudeau Research Institute for Tuberculosis.

Trials are now being made to determine the new phage’s effectiveness as a treatment for tuberculosis. It is too early to know the value of the new substance, but there seems a possibility that it may prove to be the long-sought “cure” for the white plague.

Since the discovery of bacteriophage in 1918 by Prof F. d’Herelle, the eminent French-Canadian scientist, a search has been in progress to obtain a principle of this sort which would be active against man’s great enemy, the tubercle bacillus. Success seems to have crowned Mr. Steenken’s efforts along this line.

Paralleling the observations of Prof. d’Herelle that bacteriophage destroyed the dysentery bacillus by a process known as lysis, Mr. Steenken has noted lysis or destruction of the tubercle bacilli in cultures of them kept at a certain degree of acidity. Scientific details of the investigation were reported by Mr. Steenken in a preliminary note to the Society of Experimental Biology and Medicine. (Proceedings, Nov. 1935.)

An antidote for otherwise fatal poisoning from overdoses of commonly used luminal, veronal and related sleeping powders has been found in picrotoxin, a drug formerly much on vogue but little used in recent years.

Two human cases in which the new treatment proved its worth and animal experiments leading to its use were reported by Drs. T. Koppanyi, J.M. Dille, and C.R. Linegar, Georgetown University Medical School, to the American Association for the Advancement of Science.

Physicians will soon be able to use this new treatment in rescuing from death those who inadvertently or with suicidal intent take large doses of the barbiturate sleeping powders.