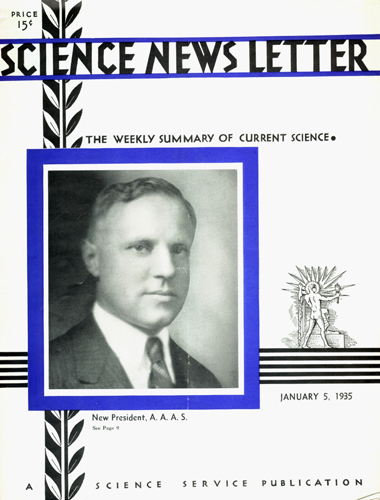 The chairman of President Roosevelt’s Science Advisory Board, Dr. Karl T. Compton, was elected president of the American Association for the Advancement of Science. Dr. Compton will succeed Prof. Edward L. Thorndike of Columbia University and he will deliver the principal address of the 1936 meeting to be held at Washington. Dr. Compton is president of the Massachusetts Institute of Technology.

Like a careful contractor who removes a stone of doubtful strength from the foundations of a building, Prof. Albert Einstein strengthened the basic foundations of his famous theory of special relativity in his address before a select group of 450 mathematicians and physicists attending the meetings of the American Association for the Advancement of Science.

Prof. Einstein’s purpose in presenting his paper on “An Elementary Proof Concerning the Equivalence of Mass and Energy” was to put on firmer ground the use of the equation E=MC2 in experiments dealing with atomic processes such as artificial radioactivity.

The now-famous equation was derived without the use of concepts dealing with the nature of the electrical forces within the atom, where scientists have yet to make experimental measures. Assumptions on these electromagnetic forces were part of Einstein’s first derivation of the equation.

Quietly, and carefully, Prof. Einstein took his audience back to 1905, when his famous paper on the special theory of relativity appeared. At that time, he explained, it seemed necessary to use a concept that an electromagnetic field energy may be localized.

The concept that the energy in a magnetic field might be localized in various points in space, Prof. Einstein said, has always been in a state of doubt amongst scientists. One group felt that the idea was sound; the other believed it was not, but neither could prove its point. It is this unprovable doubtfulness that Prof. Einstein feels is a weak link in his 1905 paper on relativity.

In his address, Prof. Einstein gave a simple proof of the way energy is related to mass by the relation, energy equals mass times the square of the velocity of light, and he did it without using the doubtful electromagnetic field energy localization of his 1905 report. His simple proof depended only on the conservation of momentum when two similar bodies collide in the inelastic and elastic impact, and upon the famous method of transforming coordinates in space developed by Lorentz.

Teaching cancer cells to forsake their fast-growing youth and become mature is the ambition of Dr. Frederick S. Hammett of Philadelphia’s Lankenau Hospital Research Institute. He reported his latest steps in cancer research to the American Association for the Advancement of Science.

A first important step has been taken through the discovery that a sulfur-containing chemical, called sulfhydryl, is essential both for normal growth and for the riotous growth of “flaming youth” that is one characteristic of cancer cells.

Discover another chemical that will inhibit this wild growth, and Dr. Hammett believes that the first step toward cancer control will have been taken. And sulfoxides, derived from sulfhydryl, might accomplish this if they could be put into the cancer tissues so as to do their work.