Japan has been expecting and preparing for the “big one” for more than 30 years. But the magnitude-9.0 temblor that struck March 11 — the world’s fourth biggest quake since 1900 — wasn’t the catastrophe the island nation had in mind.  The epicenter of the quake was about 80 miles east of the city Sendai, in a strip of ocean crust previously thought unlikely to be capable of unleashing such energy.

“This area has a long history of earthquakes, but [the Sendai earthquake] doesn’t fit the pattern,” says Harold Tobin, a marine geophysicist at the University of Wisconsin–Madison. “The expectation was high for a 7.5, but that’s a hundred times smaller than a 9.0.”

Understanding where big earthquakes will emerge is extraordinarily difficult, and nowhere more so than Japan. The northern part of the island nation sits at the intersection of four moving pieces of the Earth’s crust. Where one tectonic plate slides beneath another, forming a subduction zone, sudden slippages can unleash tremendous amounts of energy.

The Sendai earthquake occurred at the Japan Trench, the junction of the westward-moving Pacific plate and the plate beneath northern Japan. Historical records, one of seismologists’ best tools for identifying areas at risk, suggest that this segmented fault has produced several earthquakes bigger than 7.0 in the 20th century alone — but none bigger than 8.0.

That’s why the Japanese government has long focused on the nation’s southern coast and the northward-moving Philippine plate, which has a proven ability to generate large quakes. Quakes larger than 8.0 tend to strike the Tokai region in central Japan every 150 years or so, with the last big one appearing in 1854. In 1976 researcher Katsuhiko Ishibashi of Kobe University warned that Suruga trough, a subduction zone just off the coast of Tokai, was due for a big one. In the years since, the Japanese government and research community have braced for this predicted Tokai earthquake — deploying GPS systems to monitor the movements of islands on the Philippine plate and even generating computer simulations of how crowds in train stations might behave during such an event.

Current thinking about the mechanisms that govern megaquakes also favored the Philippine plate as the site of greatest risk. About 80 percent of all earthquakes above magnitude 8.5 occur at the edges of such geologically young, warm tectonic plates. Kilometer-thick sediment layers carried by these plates are thought to grind smooth patches that allow long stretches of fault to rupture at once. The Pacific plate, some of the oldest ocean crust on the planet, doesn’t fit this description.

But preliminary computer simulations at Harvard that crunched early data from the Sendai quake suggest that a long stretch of the Japan Trench ruptured during the event — about 390 kilometers. Multiple segments that usually behave independently broke over the course of two to three minutes.

“It looks like three of the segments all slipped together,” says Miaki Ishii, a seismologist at Harvard. “There is some evidence that a fourth may have been involved as well.” She doesn’t know why these particular segments ruptured together, or why other similar segments nearby didn’t join them.

What does seem to be clear is that the slip happened in a relatively shallow region of the subduction zone. According to computer simulations run by geophysicist Chen Ji at the University of California, Santa Barbara, the quake originated eight to 20 kilometers below the ocean floor. The shallower an earthquake, the more easily it flexes the Earth’s crust, raising a mountain of water that can turn into a tsunami. The Sendai quake lifted the seafloor several meters and generated a tsunami up to 7 meters high.

“We’re learning that we can’t discount any of these big subduction zones,” says Tobin. “They’re all capable of producing large earthquakes.” The magnitude-9.1 earthquake that struck Sumatra in 2004 also broke the rules: It too happened on the edge of an old piece of crust, hurling a tsunami across the Indian Ocean that was more deadly than any in recorded history.

In the United States, seismologists are now eyeing the Cascadia fault zone that flanks Oregon and Washington, which last gave way in 1700 to produce the largest known earthquake in North American history.

“Perhaps the earthquake in Japan shouldn’t have been as surprising as it was,” says Stanford seismologist Greg Beroza.

Beroza explains that deposits of sand found kilometers from shore have revealed a large tsunami that struck the Sendai area during the Jogan earthquake of 869. Ever since this magnitude-8.0+ quake, the Pacific plate has been moving more than 8 centimeters per year — a tectonic sprint — pushing against its neighbor plate and perhaps building a tremendous amount of strain.

Seismologists hope that the detailed Sendai earthquake data collected by Japan’s advanced monitoring technologies — hundreds of sensors spaced an average of 20 to 30 kilometers apart across the Japanese islands — will lead to a better understanding of subduction zone quakes. Researchers will also analyze the emerging pattern of aftershocks, which now includes at least three bigger than 7.0 and dozens bigger than 6.0.

But being able to spot signs far in advance of a big earthquake — currently far beyond the reach of modern science — may require digging deeper. Tobin and his Japanese colleagues have for the first time embedded strain sensors directly inside a subduction zone, the Nankai trough located southwest of Tokai. Large earthquakes have struck this region every 100 to 120 years, from 686 to 1946. The researchers hope to catch the next big one in the act and find a warning sign that could provide more than a minute’s notice that a monster quake is on its way.

Designed with earthquakes in mind, the Fukushima Daiichi nuclear facility on Japan’s east coast was built to withstand the shaking it took on March 11.

But what came afterward — a tsunami that obliterated whole swaths of coastal infrastructure — apparently overwhelmed the plant, leading to the worst nuclear accident since the Chernobyl disaster in April 1986.

Like most nuclear plants, five of the six Fukushima Daiichi reactors used uranium as their primary fuel. The plant’s other reactor — Unit 3 — used a mixture of uranium and plutonium. Pellets of enriched fuel are encased inside long, narrow tubes made of an alloy containing the metal zirconium. These tubes, known as fuel rods, are spaced in an array with water flowing between them. Several hundred of these packages are put together to create the core of a nuclear reactor.

The uranium-235 isotope, which contains 92 protons and 143 neutrons, is inherently unstable, tending to split, or fission, into lighter elements. Such spontaneous fission releases stray neutrons; when one of those neutrons hits a uranium atom, it initiates another fission into lighter elements, releasing more neutrons. Those neutrons can then go on to hit other uranium atoms, causing a chain reaction. Fission generates heat, which causes water to boil, making steam to drive turbines that produce electricity.

A reactor core requires constantly flowing water for cooling and to moderate the flux of neutrons. The earthquake knocked out power at the Daiichi facility, the tsunami knocked out backup generators, and the battery backups to the generators could not keep the water moving. Excess heat in several reactors caused steam to build up, which plant operators vented into the environment to relieve pressure. Hydrogen gas, formed in reactions of water with the hot zirconium rods, also built up and exploded at two of the reactor buildings, releasing radioactive by-products of fission like iodine-131 and cesium-137.

The reactors weren’t the only potential source of radiation emitted by the crippled plant. Spent fuel — depleted in uranium but containing highly radioactive fission by-products — is stored in pools of water in the same buildings that house the Fukushima Daiichi reactors. The flow of water through those pools was vulnerable to the same power-supply problems that plagued the reactors, and the tanks began heating up. In at least one case, the spent fuel appears to have caught fire.

As plant workers and emergency responders fought to bring the plant under control, radiation spread. At first, the Japanese government reassured the public that no radiation had spread beyond the plant itself, and cautioned people living nearby to stay indoors. But by the evening of March 12 the government had evacuated a 12-mile radius around the site, and within a week of the earthquake monitoring had revealed contamination of local food and water.

On March 18 the U.S. Environmental Protection Agency and the Department of Energy announced that a federal radiation monitoring station in Sacramento, Calif., had “detected minuscule quantities of the radioactive isotope xenon-133,” a substance that could have come only from nuclear fission. It posed no health threat; plant emissions reaching California were so slight they caused no radiation increase above natural background levels.

Though the accident’s full health impact won’t be known for decades, the plant workers and emergency responders who struggled to bring the plant under control are at greatest risk. Radiation levels around Unit 3 reached 400 millisieverts per hour on March 15. Health effects depend on how long someone is exposed to such levels, says Kelly Classic, a medical health physicist at the Mayo Clinic in Rochester, Minn. For comparison, 400 millisieverts is about the dose people would receive from 40 CT scans of the abdomen. Natural background rates of radiation average about 3 millisieverts per year. In the long term, exposures above even 10 millisieverts might somewhat elevate an individual’s risk of developing cancer. — Janet Raloff and Alexandra Witze 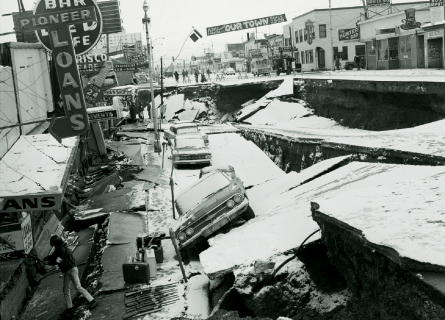 At magnitude 9.0, the March 11 earthquake in Japan was the fourth largest since 1900. Though there is no theoretical limit to an earthquake’s size, it is extremely unlikely that motion along a known tectonic fault could produce an event of magnitude 10.0 or larger.

*Combines deaths due to earthquake and tsunami