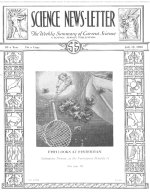 A poet once wished for the gift to see ourselves as others see us. An artist has achieved it. Wilfrid Swancourt Bronson, of New York, has cultivated the ability to see things from the fish’s point of view, taking into account the squeezed perspective one gets through the little “window” in the water directly overhead, the “breaking” of poles sticking into the water by refraction, and the dead mirror-surface of the “top” of the water outside the limited cone through which the upper world of the air is visible. The picture on the cover of this issue of the SCIENCE NEWS-LETTER is from “Fingerfins,” a charming little book of which Mr. Bronson is author as well as illustrator. It depicts the capture of the little Sargassum fish that is the hero of the tale.

Avertin, a new anesthetic developed in Germany which is just beginning to be used by American surgeons, was described to the American Medical Association in Detroit recently by Dr. Arthur M. Shipley of the University of Maryland School of Medicine.

This anesthetic is rapidly replacing ether in many types of operations. It is safe and has none of the objectionable features of ether. The drug is injected about half an hour before the operation and the patient falls quickly into a deep sleep. There is no fighting nor any feeling of apprehension. The patient comes to the operating room without having had any nervousness and consequently is in much better shape to stand the operation.

Sabotage accomplished at the last minute in the launching of the giant tubing being laid out into the Gulf Stream at Matanzas, Cuba, to bring cold water to the Claude sea power experimental plant, caused the total loss of the 6000 feet of costly tubing, Georges Claude, French physicist and inventor, has informed Science Service.

This is the second time that his attempt to tap the cool depths of the ocean has ended in disaster; yet M. Claude announced in his cable that a third large tube of insulated sheet iron was being made in France and that it would be launched at the end of August. The first conduit was lost in launching last September.

More than a mile long, over six feet in diameter, the corrugated sheet iron tube when successfully placed will reach out from the Cuban coast and suck up water from a depth of over a third of a mile. This water will have a temperature of about 50 degrees Fahrenheit.

This will provide the cooling water for Claude’s unique power plant which, instead of heating water by burning fuel, will use the relatively hot surface water of the tropical ocean which is 35 to 40 degrees warmer than the cooling water to be brought by the conduit from the depths.