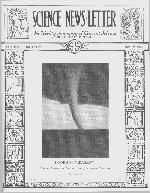 Perhaps the finest photograph ever taken of a tornado–certainly at any rate a most unusual one–was obtained by Ira B. Blackstock, a Western railroad executive, at Hardtner, Kansas, on Sunday, June 2, 1929, at about 4:30 p.m. Mr. Blackstock let the windy monster approach as closely as he dared, standing with one foot in the entrance of a cyclone cave while he waited for the right moment to snap the shutter. The white spots at the bottom of the picture, as reproduced on the cover of this issue of the SCIENCE NEWS-LETTER, are very large hailstones that accompanied the storm.

Men and women of science working patiently together in the small, obscure neurological laboratory of the Westminster Hospital in London, England, claim to have discovered the smallest disease germ ever seen by the human eye. In doing so they believe they have paved the way to a conquest of some of the most mysterious and terrible diseases afflicting mankind.

The organism they declare they have isolated, identified, and photographed is thought to be that of multiple sclerosis–commonly called “creeping paralysis”–once a rare disease in this country, but now not at all uncommon.

ROCKETS TO GO TO UNKNOWN HEIGHTS

From a small depression in a remote corner of Camp Devens, near Worcester, Mass., where thousands of American soldiers trained during the war, there will soon echo sounds of explosions reminiscent of war-time artillery practice. But the sounds will not be of big guns. They will be from rockets sailing upwards from a steel tower to heights that cannot be predicted with certainty. Perhaps their greatest altitude for some time to come will be measured in only thousands, or even hundreds, of feet, but from them scientists are looking forward to the time when they will be able to explore heights above the earth far greater than any reached by airplanes or balloons. Perhaps eventually travel to the moon or even to other planets will become possible by a development of such rocket experiments.

The Camp Devens experiment is part of the work of Dr. Robert H. Goddard, professor of physics at Clark University. Dr. Goddard is one of the pioneer students of this form of locomotion. It was in 1912, while at Princeton University, that he began his researches. In 1914 he went to Clark, where he has worked ever since.