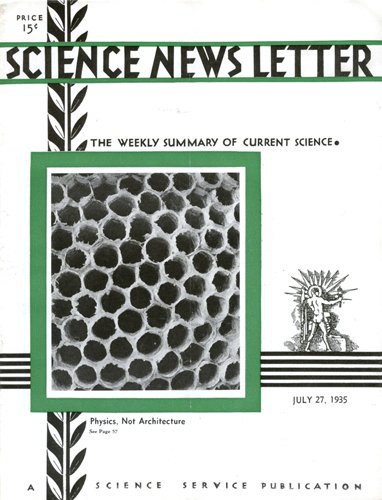 “GEOMETRY” OF BEES IS NOT RESULT OF PLANNING

Mathematical powers are often ascribed to bees and wasps, in the making of the hexagonal cells of their wax and paper combs. This is a very pretty example of the more-naïve kind of nature study, but it must be dismissed (however regrettably) as just imagination. Bees and wasps are not architects or even geometricians; their “hexagons” are really squeezed cylinders.

Not often tightly squeezed cylinders at that, as you will see if you inspect a natural honeycomb or a hornets’ nest such as Cornelia Clarke has photographed for the cover of this issue of the Science News Letter. Most of the actual cavity openings are approximate circles, inscribed within a hexagon. A little closer inspection will show that the cells are built separately, each as a cylinder, and that they are partly cemented together by looser wefts of tissue between the walls.

A very simple experiment will show how little “planning” is needed to set up an apparent hexagonal structure. Get a few dozen empty cans of the same size, or cylindrical cardboard cartons, stack them up loosely on their sides in some kind of a tray, and shake them a little. They will inevitably settle into a hexagonal arrangement. If you put pressure on the pile, the cylinders will become hexagonal prisms. But even in their unsqueezed condition, you will be seeing hexagons in that pile of circles. A honeycomb, then, is partly the effect of simple physical pressure of cell on cell, partly not even that, but just optical illusion.

Man-created gamma radiation, of the kind so widely used in the treatment of cancer and excelling the best efforts of nature over six times, is being studied at California Institute of Technology.

Four scientists, headed by Prof. C.C. Lauritsen of the Kellogg Radiation Laboratory, report in the Physical Review (July 15) that they have unmistakable evidence of laboratory-produced gamma rays having energies of 16 million electron volts. The highest energy found in natural gamma rays—given off by radioactive substances such as radium—is only 2.6 million electron volts, an energy “record” held by the radioactive element known as thorium C.

The universal protest of motorists caught speeding, “But Officer, I was only doing 25,” may soon be a thing of the past. A new portable electrical device, measuring the instantaneous speed of an automobile and lessening the chances of error on the part of traffic officers, has been perfected by Dr. Harry R. DeSilva, head of Massachusetts State College’s psychology laboratory.

Two concentrated beams of light are thrown across a road by 50-candle-power lamps operated from an auto storage battery. These activate two photoelectric cells in the indicating instrument. An automobile passing across the light beams, which are only 18 inches apart, cuts off first one light beam, charging a condenser in the recording apparatus, and then a fraction of a second later, cuts the second beam, stopping the charging process. The amount of “charge” in the condenser is translated directly by the instrument into miles per hour. Accuracy within 2 miles per hour at 60 miles auto speed and within a fraction of a mile at 30 is claimed.