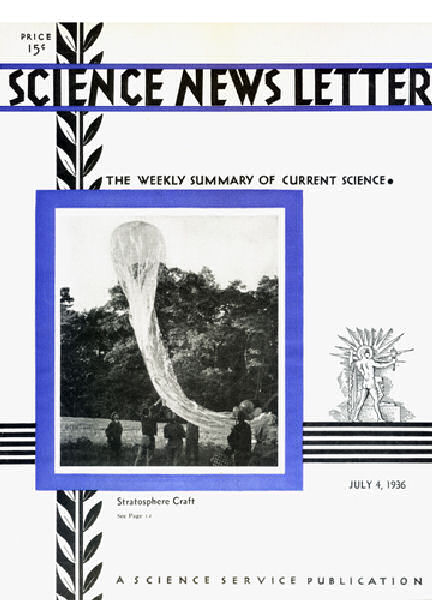 Shimmering bags of transparent material of the kind used in wrapping cigarette packages are the latest tools of science to tap stratosphere secrets. Soaring to altitudes of 20 miles, these small, unmanned balloons are being used to pierce the atmospheric heights far above where men can probe them with giant balloons carrying loads of equipment and human pilots. A vastly wider usefulness to science, research at only a fraction of the former cost, and complete freedom from any possibilities of loss of life are the three motives behind the gleaming balloons now being sent aloft which, through robot scientists in their “gondolas,” record and send back to Earth the reports from near the “surface” of the sea of air that surrounds the planet Earth.

At the National Bureau of Standards in Washington, D.C., Dr. L.F. Curtiss has sent up such a balloon to an estimated height of over 100,000 feet. From such a height one could look down on the famed Explorer II as it broke the world’s altitude record, 72,395 feet, as would the climbers of Mt. Everest on the ground 29,000 feet below.

And at the Franklin Institute’s Bartol Research Foundation, Dr. Thomas H. Johnson is sending up similar balloons in studies with which it is hoped to close the last gaps in the mystery of science that has been the cosmic ray.

Experiments on the ability of the new neutron rays of science to produce biological changes in living organisms show that they are much more efficient than X-rays, Dr. Raymond E. Zirkle, Johnson Foundation for Medical Physics at the University of Pennsylvania, told the meeting of the American Association for the Advancement of Science.

The ultimate hope of the investigators, Dr. Zirkle revealed, is that the neutron rays will be more destructive to tumorous tissue than to normal tissues. This differential destructiveness is possessed to a certain extent by X-rays, but if the neutron should prove to have it to an even greater degree, it would thereby be a much more potent radiation with which to attack cancer.

By aid of delicate chemical tests that sound like magic, dry bones of Egyptians who lived 3,300 years ago can be made to give up important secrets regarding types of blood that once flowed in their veins.

The experiment, pronounced successful, is expected to open up a “vast new field of research” enabling science to probe long-lost chapters of man’s racial history.

Announcement of the tests was made before the American Association for the Advancement of Science by Dr. P.B. Candela, Brooklyn physician. In his tests, Dr. Candela used skeletons of Egyptian women who lived in the days of Egypt’s eighteenth dynasty, 1500 B.C., now in collections of the Brooklyn Central Museum.