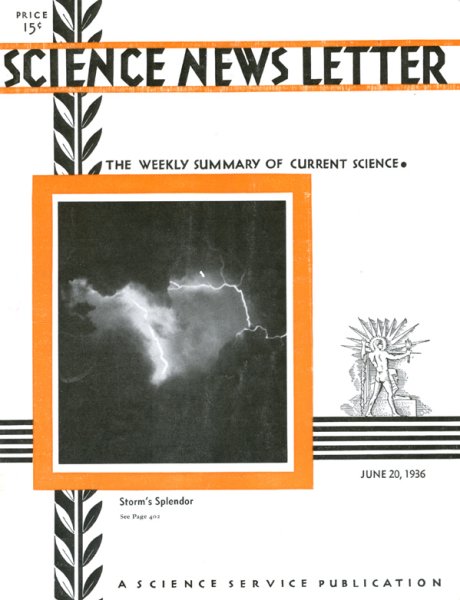 Lightning is one subject that the photographer can never persuade to pose for him. To catch a view such as that on the front cover of this week’s Science News Letter, he must direct his camera toward a likely portion of the sky, open the shutter, and then hope for the best.

The elements were particularly obliging for the camera of Arthur L. Cooper, who took this shot late on a summer evening at Eagle River, Wisconsin.

Cosmic rays and other sorts of fast-flying atomic particles which are shooting continually about the universe between the stars, planets, and galaxies may explain many of the mysteries of astronomy, it is suggested in a scientific report published by the National Academy of Sciences.

Dr. Fritz Zwicky, California Institute of Technology physicist, points out in the Proceedings of the Academy (May) that cosmic rays may be responsible for some of the light received from giant stars and that the rays also produce forces sufficiently great to cause—in the course of time—astronomical changes. So far, Dr. Zwicky intimates, only the terrestrial aspects of cosmic rays have been studied by scientists.

Cosmic rays, the California scientist states, may be expected to be scattering continually the clouds of gas molecules that are thought to be the first step in the formation of a new galaxy of stars. Gravity is the force which tends to build up these clouds of molecules.

HELIUM SUGGESTED AS NEW PREVENTIVE OF “THE BENDS”

Helium, now used to lift men into the air, may find a new use in treating those who go underground or under the sea and who, working under compressed air, contract caisson disease or “bends.” This appears from recent investigations on helium’s solubility in the blood, reported by Drs. J.A. Hawkins and C.W. Shilling of the Experimental Diving Unit at the U.S. Navy Yard (Journal of Biological Chemistry).

The “bends,” an excessively painful malady that affects workers who are exposed to air at high pressure, is caused by the blood’s taking up a great deal of nitrogen from the air. When the workers come into normal air pressures, this forms bubbles in their veins, and may result in permanent crippling or death. Even the most modern methods of bringing men from high pressures to those of the atmosphere slowly do not entirely obviate the danger of caisson disease.

Helium, like nitrogen in that it is an inactive gas and plays no part in the actual requirements of the body, is less soluble in water than is nitrogen. Under pressure, less would dissolve in the blood, and what did dissolve would be more rapidly dissipated if helium were substituted for nitrogen in the compressed air supplied to divers. This would cut down on the danger from caisson disease.