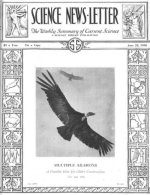 When men first began to dream of flying like birds (which they have done ever since the legendary Daedalus), they watched the flight of birds, hoping to catch their trick and learn to imitate them. The many-faceted Leonardo used to spend hours and days watching and sketching pigeons. And when at last the Wrights led the way into the air, they avoided the tragic fate of Icarus and kept their balance on their unstable supporting medium because they had seen how birds use their flexible wing tips in coordination with their tails to maintain themselves on an even keel or to turn and bank as they will. The flexing wing tips of the early Wright models, succeeded by the little auxiliary hinged planes we call ailerons, are man’s efforts to build himself wings that are really like those of the birds.

The coming of the great sport of gliding, as distinguished from aviation, is bringing new attention to details and refinements of maneuvering that the powerfully engined airplane can afford to overlook, or that at its higher speed it cannot adopt.

The most successful of gliding birds are the condors and their relatives the vultures and buzzards. They hang aloft for hours, with scarcely a flap of their wings, even climbing to great heights by cleverly taking advantage of rising currents of air.

One thing notable about the silhouette of a condor or vulture as seen from underneath is the way he stretches out the long, stiff feathers of his wing tip, like the fingers of a hand. Most other birds keep these balancing feathers close together. If you watch the flight of a buzzard with a pair of field glasses, you will see that sometimes he makes a delicate adjustment of position by the shift of a single feather, or by a ripple-like sequential movement of the feathers one after the other. In effect, he has not one aileron but half-a-dozen or more on each wing tip, separate yet coordinated. There may be something in this system worth the study of our growing group of glider enthusiasts.

The condor shown on the cover of this week’s SCIENCE NEWS-LETTER is a mounted bird, that soars motionless in the artificial heavens of the great bird dome of the American Museum of Natural History in New York City.

SPACE AS SOLE CARRIER OF REALITY

“Space will finally survive as the sole carrier of reality.”

So Prof. Albert Einstein predicted to the Second World Power Conference in Berlin. To the audience of 2,000 who assembled to hear his address, Prof. Einstein was introduced as “the Newton of the present day.”

Prof. Einstein traced the evolution of man’s ideas of the constitution of the universe from the days of the old Euclidean geometry, which gave a notion of space based on the relations of bodies in connection with each other.

Descartes was the first to introduce space as the general container of the universe, Prof. Einstein declared. The picture of space as seen by Newton did suffice, he said, to describe physical relations until Maxwell introduced his field theory of electromagnetic waves upon which the whole of modern electrical development has been based.

The fact that electromagnetism acts at a distance made the conception and notion of an ether necessary. But Prof. Einstein, destroyer of the necessity for an ether, explained: “By means of the relativity theory, space loses its generality, and its structure must be regarded as changeable. There is analogously to Reimann’s geometry a mathematical space structure possible wherein metric continuity and direction are united in a four-dimensional reality.”

Space was originally derived from physical bodies. This space has annihilated the ether and time. Prof. Einstein is now engaged in the formulation of newly developed generalizations, which promise to annihilate fields of force, corpuscle, and material particles in such a way that the fundamental stuff of the universe will prove to be not matter, as previously supposed, but space itself.

Definite proof that Pluto, the planetary object recently discovered by Lowell Observatory astronomers, is really a planet revolving beyond the orbit of Neptune has been obtained by astronomers at the Mt. Wilson Observatory, Pasadena, Calif.

“This orbit indicates definitely that the object belongs to the solar system and is a small trans-Neptunian planet, rather than a comet,” said Dr. Shapley. “The new orbit satisfactorily represents all known observations of the planet.”