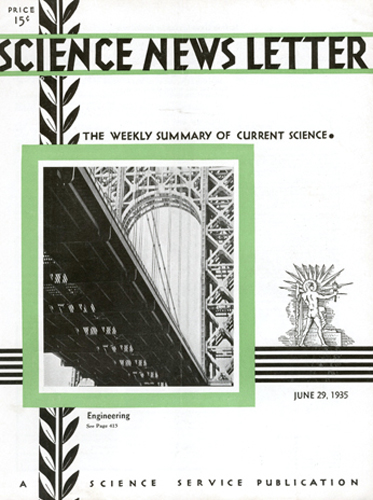 The interesting view of a bridge appearing on the front cover of this week’s Science News Letter is from one panel of a series of photo-murals recently displayed at the Science Fair of the American Institute. This panel is entitled “Engineering.”

The entire work on the photo-murals, from negative to final panel, was done by members of the Experimenters’ Club of DeWitt Clinton High School, New York City.

LINDBERGH AND CARREL GROW ORGANS OUTSIDE OF THE BODY

Col. Charles A. Lindbergh, premier aviator, has written his name in the annals of experimental medicine, bracketed with that of Dr. Alexis Carrel, Nobelist of the Rockefeller Institute for Medical Research.

A new method of transplanting living glands or any other parts out of the body into a glass chamber, there to live for days artificially fed on a blood substitute by an ingenious Lindbergh-designed mechanical “heart,” has been announced by the scientific team of Carrel and Lindbergh. (Science, June 21).

For the first time an entire organ has been made to live outside the body.

The Lindbergh apparatus for maintaining a sterile pulsating circulation, combined with the Carrel techniques for transplanting organs and keeping them free from bacteria, has been used in 26 recent experiments. The organs made to live in vitro were: thyroid, ovary, suprarenal, spleen, heart, and kidney.

The organs not only continued to live but some grew and added new cells and tissues to themselves. One organ more than tripled its weight in 5 days.

A strange substance that looks like sand but has the power to absorb water vapor from air and that seems destined to reduce the cost of air conditioning to within reach of average home owners, was described before the meeting of the American Society of Heating and Ventilating Engineers at Toronto by W.E. Stark of Cleveland.

This substance, known as silica gel, was widely used in gas masks during the war to absorb poison gases. Until recently, it was mainly a laboratory curiosity, although some of its properties have been familiar to science for many years. A new development is its use in air conditioning, where it has been proved to be an ideal dehumidifier.

Each crystal of silica gel consists of a hard core surrounded by many submicroscopic pores that, while invisible, reveal their presence in laboratory experiments. The air-conditioning device contains silica gel reactivated by passing ordinary natural or coke gases through.

Use of the new system may result in the simplification of air-conditioning systems, which up to now have been confined to large buildings because of the cost of installing the required equipment. Silica gel was envisioned as playing a leading role in lowering the cost and making air conditioning available to small residences.