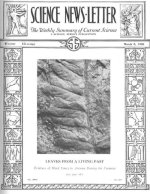 Fossil remains of plants found in the walls of the Grand Canyon show that many millions of years ago stunted vegetation of very singular aspect grew in a great, red, sandy floodplain under a semi-arid climate in northern Arizona. This great red land has been found by Dr. David White of the U.S. Geological Survey, who has been studying the deposits and their remains of extinct plants for the Carnegie Institution, to have continued a long time before the region sank beneath the sea and was covered with the seashell-bearing limestones hundreds of feet thick that form the upper part of the walls of the Canyon. These limestones pave the high plateau through which the Canyon was and is still being cut, and they underlie the foundations of the hotels and camps on both sides of the great abyss.

Ink blots, ordinary symbols of carelessness, assumed new importance when they were discussed by S.J. Beck of the Boston Psychopathic Hospital at the American Orthopsychiatric Association meeting in New York. Specialists assembled to talk of the newest psychiatric methods in preventing and dealing with delinquency heard a description of 10 carefully planned splashes of black and colored ink that have been devised to aid in diagnosing personality. The person tested looks at each blot and interprets it as his fancy, his intelligence, and his experience dictate.

The test is the first attempt ever made to get a sample of an individual’s intelligence, his emotional slants on life, his behavior, all at once. A Swiss psychiatrist, Hermann Rorschach, devised the test, which Mr. Beck is now experimenting with to determine its usefulness in this country. The test appears to be a reliable indicator of abnormal personality types, he finds.

FIGURINES FOUND IN RUINS AT UR

Slender, archaically modeled little female figurines and the clay image of a flying bird, recently turned up in the ruins of Ur, may well be the idols of the ancient people whose doings disgusted Noah and provoked Yaveh into sending the Flood. At any rate, these images have been found deep in the soil under the ancient city, associated with the thick layer of mud deposited by the Deluge, by the joint expedition of the University of Pennsylvania Museum and the British Museum. A report of the discovery has just been received from C. Leonard Wooley, field director of the expedition.