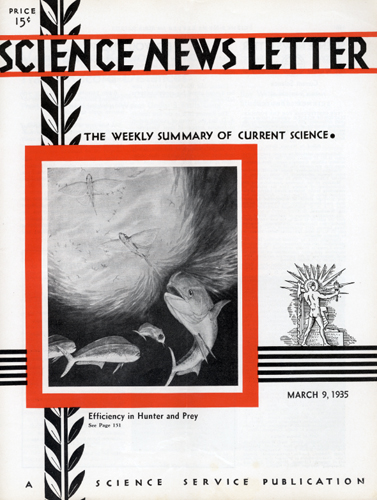 Mankind is more than a little proud of itself for having, at long last, learned the trick of flying. Takes brains to do that kind of thing, we tell ourselves with an unconcealed smirk.

Yet hundreds of millions of years ago, the remote ancestors of our present-day fishes, with scarcely any brains to speak of, solved a very similar problem for themselves, and in a very similar way. Their final solution is, indeed, rather more successful than our best efforts so far—really a better engineering job.

The problem faced by the fishes was nothing less than learning how to swim. It may sound decidedly “fishy” to suggest that there ever were fish that could not swim, but such seems to be the case. The earliest fish of which we have any fossil record—and they were already pretty well advanced evolutionally—spent their lives squatting on the bottom. They had very imperfectly developed fins and tail, and probably could swim only a few strokes before they had to settle down on the sand again. Their swimming was about as much like real swimming as a boy’s jumping is like flight.

The struggle of fish for the freedom of the seas, foreshadowing paradoxically man’s struggle for the liberty of the air, was portrayed before a meeting of the American Association for the Advancement of Science by an English scientist, John E. Harris of the department of zoology at Cambridge University. Mr. Harris told, point for point, how fish unconsciously adopted the same engineering principles for “flying” in the water that man, with painful, conscious thought, ages later found necessary for efficient flying in the air.

Streamlining, which man did not trouble to use in his first flight efforts, was without much doubt an already accepted feature of construction in the very first fish. Nobody has yet seen any fossils of these very first fish, but we do have some fossils of pretty early ones—300 million years, or some such matter, is their age—and they have quite satisfactorily streamlined bodies. No matter if they didn’t swim against the water: In tidal flow or river current, the water swam against them, so streamlining was an advantage even at the beginning of things. And if advantageous to these early descendants of the pioneer First Families of Fishdom, then presumably also to the still-unknown pioneers themselves.

Very short radio waves, only a few feet in length, have traveled record distances in Harvard experiments, and warm air currents riding above colder air masses are believed to be responsible.

Using a 1-1/4–meter wavelength, signals have been exchanged between a Cambridge experimental station and one at Mt. Wachusett, Mass., a distance of 68 miles and probably a record for 1-1/4–meter transmission.

Tides in the solid Earth that alter the distance between the North American and European continents by as much as 63 feet have been discovered by Prof. Harlan T. Stetson, research associate in geophysics at Harvard University, and Dr A.L. Loomis, New York banker and scientist who operates as a serious hobby the Loomis Laboratory, Tuxedo Park, New York. These tides in the Earth are believed to be caused by the moon through its gravitational pull; much in the same manner as it causes ocean tides.

They were discovered by the two scientists when discrepancies in astronomically checked clocks in Europe and in North America increased and decreased regularly with changes in the moon’s position.