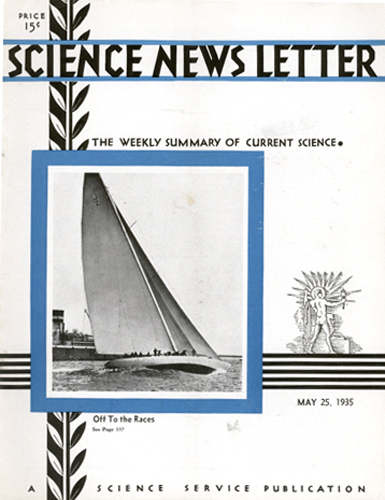 Returning the recent visit of the British yacht Endeavour, which challenged for the America’s Cup last year, the American yacht Yankee, shown on the front cover of this week’s Science News Letter, is now in England for a series of races with British sloops in her J class.

The Yankee’s newest contribution to yachting is her 165-foot, all-welded nickel steel mast, first of its kind ever placed aboard such a large yacht, according to the Lincoln Electric Co.

The mast is 18 inches in diameter at the bottom and 7 inches at the top. Its thickness at the base is 3/16 of an inch and 1/8 inch at the peak. It weighs 5,700 pounds as compared with the 6,200-pound weight of the wooden mast it replaces.

More than that, the new steel mast saves 320 square feet in windage—the yachtsman’s term for air resistance that slows up a boat. The saving is equivalent to the sail area of a racing sloop 42 feet long.

During the summer the Yankee will meet the Endeavour, Shamrock V, and the King’s own veteran cutter Britannia.

Plants are chemically tricked into become poisonous to livestock in some parts of the West because a toxic element in the soil, selenium, is chemically a very near relative to the beneficial and necessary sulphur. So close is their kinship that the absorbing mechanism of the plants cannot tell them apart, and so takes in the bad with the good. The remedy for this situation is to add so much sulphur to the seleniferous soils that the undiscriminating plants will get a great deal more of it than they do of the selenium.

This, in brief summary, is the plant-physiological picture arrived at by Dr. Annie M. Hurd Karrer of the U.S. Department of Agriculture.

The problem of “selenized” plants is one of the most serious that scientists of the department have been called upon to solve in recent years. Some time ago, reports began to come in of livestock afflicted with a crippling and finally fatal disease, resulting from eating grain grown in certain parts of the northern Great Plains. The trouble was finally traced to grains grown on soil of one particular geologic type, often low in sulphur but unusually high in the less-familiar element selenium.

Bones of an extinct flesh-eating animal related to the kangaroo but much bigger than a grizzly bear, fossil frogs, remains of a totally new kind of fossil browsing animal 5 feet high, are among the scientific trophies brought back from South America to the American Museum of Natural History by Dr. George Gaylord Simpson, associate curator of vertebrate paleontology.

Dr. Simpson and his associates made actual a semilegendary “place of bones” deep in the interior of Argentina’s “Wild South,” Patagonia, as the result of a chance sight of a fossil jawbone in a bank in Buenos Aires. They went through adventures of an almost Marco Polo type, including a brief sojourn at the ranch of a veritable ogre of a bushy-eyebrowed killer known as the Terrible Turk, and passage through a land where the natives valued money at nothing but would sell you anything you wanted for an empty tin can.

Finally, after disappointing searches in the region to which they had been directed, they found, in a fissure-sided hill, a tremendous deposit of bones, believed to be one of the richest “fossil mines” ever discovered. The deposit appears to be the silted-up bottom of an ancient lake that formed in the crater of an extinct volcano. Apparently, animals coming down to drink were overcome and killed by poisonous fumes from cracks in the earth that were the dying gasps of the old volcano itself.

The bones were so thick, where they had been weathered out in the course of ages, that they cluttered the ground, and the explorers stumbled over them.

The big, hitherto-unknown herbivorous animal they found has been named Scarrittia, in compliment of H.S. Scarritt, sponsor of the expedition.