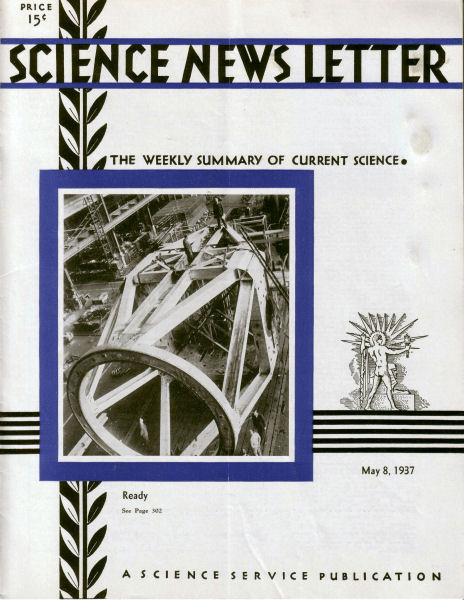 The final bolt in a spider web of steel that will finally become the mounting for the world’s largest telescope has been turned into place at the turbine plant of the Westinghouse Electric and Manufacturing Company.

Dr. Robert A. Millikan, Nobel prize winner and chairman of the executive council of California Institute of Technology at Pasadena, attended the culminating act of fitting the final part of the mounting, which will have a total weight of 900,000 pounds. Thus the second stage in the fabrication of the biggest “eye” of astronomy was finished. The great glass disc for which the mirror of the huge telescope has long since been cast and is now being ground is already in the workshops of Caltech, gradually being fashioned—”figured” as astronomers say—to its proper curvature. The completed telescope: mirror, mounting, observatory building, and auxiliary equipment, will cost $6 million when finally put in operation in 1940. Funds were made available by the Rockefeller Foundation for the project.

A new form of matter has been discovered. It has as yet no name. Unlike other recently discovered particles there is no empty niche in the present scheme of things to which the newcomer can be assigned.

The discoverers, Dr. Seth Neddermeyer and Dr. Carl Anderson of the California Institute of Technology, have just a few important properties to announce although they have concentrated on proving the existence and learning the nature of the new substance for over 2 years.

During that time, the experiments seemed always to show the new particles, but because of the startling character of the particles the experimenters heretofore hesitated to emphasize the implications. It was the longest and most difficult problem undertaken with the famous apparatus built by Dr. Anderson.

With this apparatus, he discovered the positive electron in 1932, for which he received a Nobel Prize last year. It was necessary first to examine the behavior of electrons. Then, protons had to be eliminated as a possible explanation of the apparent paradoxes.

Now, they offer the latest striking evidence that the new particle is different from everything now accepted.

Rocketry, long considered off the main path of the engineering sciences, is attracting the attention of student engineers at Yale. The recently organized Yale Rocketry Club, consisting of engineering students and devoted to the study of fundamental rocket principles, plans to carry out actual experimentation and research in this field.

Experimentation in rocketry has long passed the phase of sending up rockets for the purpose of gathering pertinent facts about the efficiency of the device. Proving stands built to hold the rocket motor securely to the ground, having delicate gauging mechanisms, furnish data on fuel flow, fuel-tank and combustion-chamber pressures, and jet reactions. This method the engineers of the Yale Rocket Club plan to use.

The most pressing problems for rocket research are those concerning liquid fuels, used today almost to the exclusion of old-fashioned explosive powder mixtures; and those dealing with constructional metals for the motor and the entire rocket. The Yale engineers point out that while liquid oxygen is now generally used in conjunction with either gasoline or alcohol, there are many drawbacks to this fuel mixture. They believe future development in the field of rocketry awaits the discovery of a more dependable source of power.

The liquid oxygen brings about many of the difficulties. Because of its low boiling point, large increase in volume during transformation from the liquid to gaseous state, effect upon the strength of metals at low temperatures, and its tendency to cause valves to freeze and stick, it is hard to control with certainty.

Astronautics, as this new field of science is called, is expected to yield information of an exploratory nature concerning the stratosphere. It is believed that astronautics will provide hitherto unknown facts for the meteorologist, astrophysicist, biologist, and aeronautical engineer.