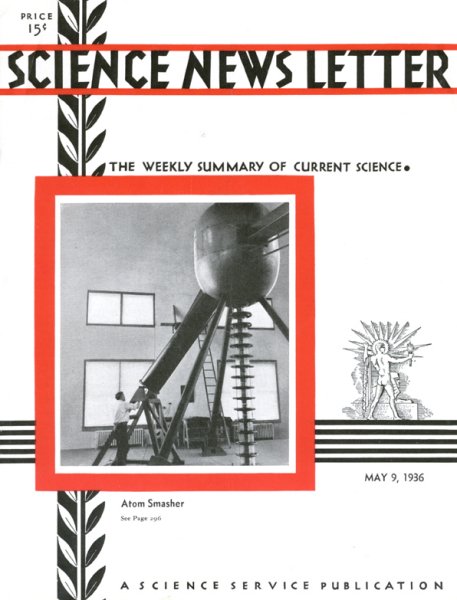 A veritable fortress of science that will have more than a passing resemblance to the famed “ring of steel” forts that France has built along its eastern border, is planned for early construction by the scientists of the Carnegie Institution of Washington.

A giant atom-smashing machine of the electrostatic type, which will produce bombarding “bullets” of at least 10 million volts energy, will be built by Dr. M.A. Tuve of the Carnegie’s Department of Terrestrial Magnetism, it was announced at the meeting of the American Physical Society in Washington. The construction of the new atom “fort” is comparable, in its field of atomic study, with the construction, 25 years ago, of the great 100-inch telescope which brought worldwide fame to Mt. Wilson Observatory of the Carnegie Institution.

A striking feature of the new design, said the report of Dr. Tuve and his colleagues, Drs. L.R. Hafstad and Odd Dahl, will be the use of earth, concrete and underground water tanks to shield the delicate measuring equipment and the observing scientists from the potent, dangerous, high-energy rays that the apparatus will produce.

A great high-pressure sphere, 60 feet in diameter, will be half-buried in the side of a hill with the high-voltage vacuum tube device inside. The underground target can be flooded with water for some experiments with piercing neutron beams. Scientists and their sensitive equipment will be located in yet another subterranean vault where they will watch what happens as the high-energy projectiles from the “fortress” strike atoms.

Because the latest animal tests indicate that neutron rays (powerful streams of atomic particles totally unknown before 1932) are more effective than X rays in killing animal tumors, it is possible that medicine is on the verge of applying a new weapon to human cancer.

Dr. John H. Lawrence of Yale University and Prof. Ernest O. Lawrence of the University of California reported to the American Society for Clinical Investigation, meeting in Atlantic City, the scientific data that raise the hopes of medical science for a more powerful weapon in its fight against cancer.

A brief but amazing glance at scientific experiments which foreshadow what communication of the future may be like with radio waves only 6 inches long was presented before radio engineers and physicists by Dr. G.C. Southworth, Bell Telephone Laboratories, New York City.

Speaking, by invitation, before a joint meeting of the American Physical Society and the Institute of Radio Engineers holding their spring meetings in Washington, D.C., Dr. Southworth described his studies of a new form of wave propagation along guide lines. The electric waves used were of extremely high frequency and, indeed, beyond any wave frequencies used for communication today. The fundamental nature of Dr. Southworth’s waves makes them akin, in one sense, to radio waves, but instead of being broadcast in all directions through space they travel along specially constructed guides from point to point.

But before jumping to the assumption that the guiding system is like a telephone or telegraph wire, warned Dr. Southworth, it should be realized that the wave guides are like nothing so far used for the purpose in communication. Instead of consisting of electrically conducting wires, the wave guides are composed of hollow metal tubes. The waves travel along inside nine-tenths as fast as light on insulating material that will not conduct an ordinary electrical current.

The waves, being inside what is essentially a metal shield, have little external effect on nearby instruments and in turn are almost completely free from static and other noise troubles caused by outside interference. These two points alone indicate the difference between the present system and ordinary radio, where interference between stations and annoyance from static are a major problem.