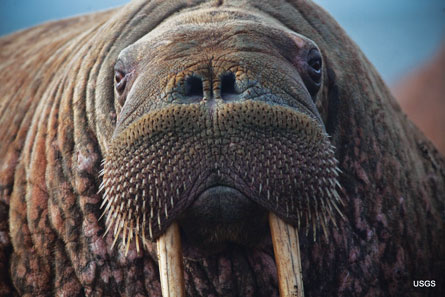 A gigantic group of Pacific walruses, foiled from reaching prime feeding grounds by missing ice, gathered September 23 near Point Lay, Alaska, on the shore of the Chukchi Sea.

The beach’s popularity is due to necessity. Typically the walruses scour the seafloor at a popular feeding ground known as the Hanna Shoal, about 240 kilometers from Point Lay, and take breaks between meals on slabs of floating sea ice. But recently, warming temperatures and shrinking summer ice cover have forced the animals to seek solid ground during feeding season. Scientists first observed walruses colonizing Point Lay in 2007.

Scientists spotted this year’s herd on September 13 and estimated the crowd contained about 10,000 walruses. Since then, the group, known as a haul out, has waxed and waned, with as many as 35,000 animals observed on September 27.

Point Lay is no all-you-can-eat buffet, says Joel Garlich-Miller, a wildlife biologist with the U.S. Fish and Wildlife Service. The sandy beach is low on mussels, oysters and other delicacies, and it exposes the walruses to predators such as polar bears and humans. When spooked, the herd can stampede and may trample and kill calves.

Concerned about the overall health of the herd, scientists recently affixed radio transmitters to 37 walruses. Meanwhile, local residents and the Federal Aviation Administration have worked to reroute planes to reduce potentially panic-inducing noise.