They’re not quite Earth’s twins, but they might be its big sisters. Two planets slightly larger than Earth have been found by NASA’s Kepler space telescope. The planets circle their star at a distance seemingly just right for life. Detailed in research published April 18 in Science, the two planets are likely the first of many that, at least from a distance, look a whole lot like home.

“It’s just the tip of the iceberg,” says Sara Seager, an astronomer at MIT who was not part of the study. “When one type of object is found, there are many more just under the surface waiting to be discovered.”

Kepler’s latest discovery is a five-planet system around a star called Kepler-62, some 1,200 light-years away in the constellation Lyra. Astronomers found the planets by analyzing nearly three years’ worth of data. The inner three worlds are too hot for life, but planets Kepler-62e and Kepler-62f are far more accommodating. They are 1.6 and 1.4 times the diameter of Earth, respectively, and their orbits are within the boundaries of the habitable zone in which scientists think liquid water could exist.

“They are great candidates for being habitable planets,” says William Borucki, Kepler’s principal investigator, who came up with the idea for the planet-hunting telescope in the 1970s.

Kepler-62f is particularly intriguing, says Rory Barnes, an astronomer at the University of Washington, Seattle who was not involved in the research. It receives less energy from its star than Earth does from the sun, but if it has a relatively thick, heat-trapping atmosphere, it could sustain a comfortable surface temperature. “It’s not inconceivable to think about walking on the surface of 62f,” Borucki says.

Kepler-62e is less of a sure thing, Barnes says. It may be too close to its star – and therefore too hot – to sustain life. And if 62e is a rocky planet, it’s almost certainly tidally locked with its star, with one half of its surface always illuminated and the other perpetually dark.

But analyses from the Planetary Habitability Laboratory at the University of Puerto Rico, which evaluates the chances for life on every discovered exoplanet, disagree. The lab ranks 62e as the most Earthlike world ever found.

The biggest uncertainty about both planets is their composition. Kepler detects planets by looking for their shadows as they cross in front of their stars. Just as a golf ball and a ping-pong ball cast similar shadows, a rocky planet crossing in front of its star is indistinguishable from one composed entirely of gas or water with no solid surface.

Kepler began snagging sizzling giant planets in May 2009, almost as soon as it started staring at 170,000 stars for signs of orbiting planets. Lately the mission’s discoveries have become considerably more Earthlike. Researchers announced the discovery of the first Earth-sized worlds in December 2011, along with the first Kepler planet to orbit in its star’s habitable zone. That planet, Kepler-22b, is so large that it probably resembles a hot, miniature Neptune – gassy, not rocky (SN Online: 12/6/11).

Astronomers are trying to determine how big a planet can be and still be rocky, not gaseous. Unfortunately, our solar system has a huge size gap between the largest rocky planet, Earth, and the smallest gaseous one, Neptune, at four times bigger. But astronomers have managed to determine both diameter and mass for a handful of exoplanets, and the early evidence supports the optimistic view that at least 62f is rocky. “We expect it to be a rocky planet,” Borucki says.

Regardless of whether 62e and 62f are vibrant worlds teeming with life or sterile balls of gas, Borucki emphasizes that Kepler still has not attained its ultimate goal of finding Earth-sized planets in the habitable zones of sunlike stars. To Borucki, 62e and 62f are slightly too big and their star slightly too small – Kepler 62 is about two-thirds the size of the sun and several hundred degrees Celsius cooler.

Finding planets in the habitable zones of larger stars will be harder because those planets have relatively long orbits and barely cast a shadow as they pass across the faces of their suns. But Kepler is beginning to identify alluring planets around larger stars like the sun, according to another study published April 18 in the Astrophysical Journal. The Kepler team, led by astronomer Thomas Barclay at NASA Ames Research Center in Moffett Field, Calif., identified two planets around a sunlike star called Kepler-69, some 2,700 light-years away in the constellation Cygnus.

One of the planets is 1.7 times the size of Earth and teeters on the inner edge of the habitable zone. It’s probably too hot for life – “It’s almost certainly a super-Venus rather than a super-Earth,” says Penn State planetary scientist James Kasting. But the planet provides another reason to believe Kepler will find an Earth analog soon.

Seager is already celebrating. “This is the first time they’ve found what they’re looking for,” she says, noting that even a planet 75 percent larger than Earth is potentially habitable. “I’m really excited to be living in a time when finding Earth-sized planets in the habitable zone is going to become routine.”

That is exactly the plan: While individual planet discoveries are nice, Kepler is a statistical mission trying to detect enough Earth analogs to estimate how many exist in our galaxy. Next-generation missions like the Transiting Exoplanet Survey Satellite, which NASA approved earlier this month for launch in 2017, will take on the task of finding nearer planets that astronomers can study in depth.

Borucki hopes Kepler will observe through 2017 to ensure a greater census of Earthlike planets. In addition, the computers that pore through Kepler data have flagged more than 350 Earth-sized candidates that have not yet been confirmed as planets. For all we know, Kepler has already found a true Earth twin that remains buried in terabytes of data.

Borucki hopes that big discovery will come within the next year. “I consider 62e and 62f golden discoveries,” he says. “But we’re hunting for platinum.” 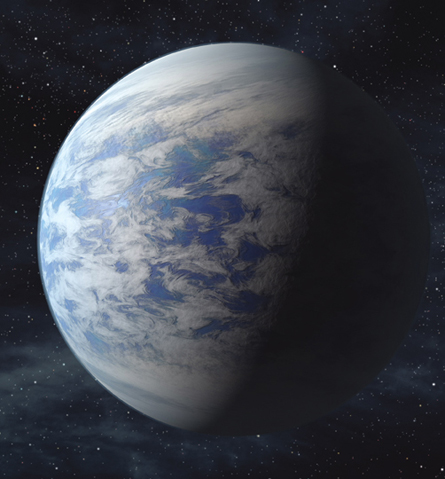 Kepler-69c (shown in illustration), the smallest planet yet found in the habitable zone of a sunlike star, is more likely to resemble Venus than Earth. Credit: Ames Research Center/NASA, JPL-Caltech

Though Kepler-62e and 62f are less than twice the size of Earth, they orbit a star that is substantially weaker than the sun. Finding planets in the habitable zones of sun-sized stars will be harder than detecting the Kepler-62 planets because such worlds have longer orbits and cast smaller shadows as they pass across the faces of their suns. But Kepler is beginning to identify alluring planets around sun-sized stars, mission scientists report April 18 in the Astrophysical Journal. The Kepler team identified two planets around the sunlike star Kepler-69, some 2,700 light-years away in the constellation Cygnus. One of those planets is 1.7 times Earth’s size and teeters on the inner edge of the habitable zone. “It’s probably more of a super-Venus than a super-Earth,” says Penn State planetary scientist James Kasting. But the discovery provides another reason to believe Kepler will find an Earth analog soon. —Andrew Grant