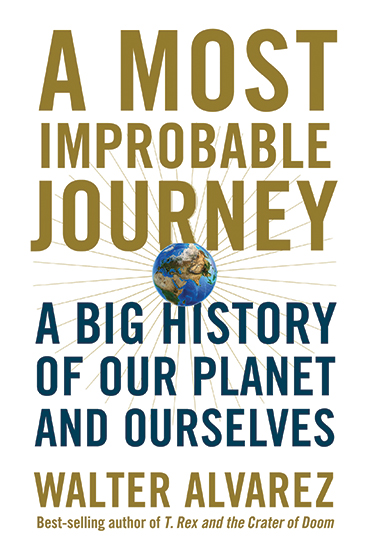 Most people do not marvel much at sand. We may enjoy how it feels under our bare feet, or get annoyed when someone tracks it into the house. But few of us see those quartz grains the way geologist Walter Alvarez does — as the product of 4.5 billion years of improbable cosmic and geologic events that defined the course of human history.

Sandy beaches exist because silicon — a relatively rare element in the solar system — happened to become concentrated on Earth during the solar system’s early days, Alvarez, of the University of California, Berkeley, writes in A Most Improbable Journey. While powerful solar particles swept lighter, gaseous elements toward the outer planets, more massive, mineral-forming elements such as silicon, magnesium and iron were left behind for Earth. Later on, in the molten crucibles between Earth’s colliding tectonic plates, these elements formed the raw materials for pivotal human inventions, including stone tools, glass and computer chips.

The 4.5 billion years of history that led to a computer chip is just one of many stories of scientific happenstance that Alvarez presents. Best known for proposing that an asteroid impact killed off the dinosaurs, Alvarez argues that rare, unpredictable cosmic, geologic and biological events — what he calls “contingencies” — are key to understanding the human condition.

Fans of Bill Bryson’s A Short History of Nearly Everything will appreciate Alvarez’s enthusiastic, clearly written tour of contingencies that have shaped our world, starting with the origins of life on Earth. No matter how distant the event, Alvarez quickly zeroes in on its eventual impact on people: For instance, the formation of oceanic crust helped expose rich deposits of copper ore on Cyprus, later an epicenter of the Bronze Age. A catastrophic Ice Age flood formed the English Channel in which the Spanish Armada would later sink. And ancient rivers in North America smoothed the terrain of the westward trail for American pioneers in covered wagons.

Not all of Alvarez’s arguments are convincing — his claim in the final chapter that every individual is a “contingency” in his or her own right, given how many other people could have been born instead, feels more flattering than important. Still, it’s hard to argue with his observation that impulsive human actions can transform the planet just as much as earthquakes, asteroids and other difficult-to-predict, occasionally world-changing phenomena.

Critics of this macro view, described in academia as “Big History,” say that the approach sacrifices important nuance and detail. At roughly 200 pages of text, however, A Most Improbable Journey does not claim to be a comprehensive account of history or a replacement for more detailed, focused examinations of the past. Instead, it makes a compelling case for Big History as a fun, perspective-stretching exercise — a way to dust off familiar topics and make them sparkle.

Buy A Most Improbable Journey from Amazon.com. Sales generated through the links to Amazon.com contribute to Society for Science & the Public’s programs.