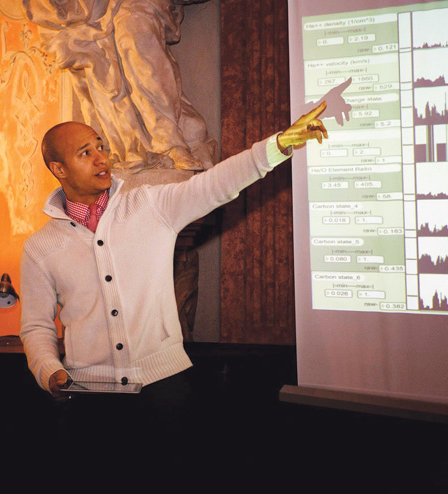 Before tuning in to the rhythms of the sun, Robert Alexander (left) watched dancers’ movements and translated them into music. “When they got bigger,” he says, “the sound would get bigger.”

Alexander is a graduate student at the University of Michigan in Ann Arbor, splitting his time between music and solar physics. He’s experimenting with data sonification — the art of converting data into sound.

His dancer-inspired creations caught the ear of physicists working with NASA’s ACE satellite, which measures the constant shower of energetic particles from the sun known as the solar wind. Turning ACE data into audio “was just a matter of unplugging the dancers and plugging in the sun,” he says.

Dancers, stars and sounds have something in common: They change.
A surge of particles resembles a musical crescendo; a strengthening magnetic field is like a rise in pitch. Alexander turns intensity into volume, frequency into tone. A few hours of data collapse to a few seconds of audio.

Sounds of the sun

The crashing together of plasma streams near the sun sounds like a flutter followed by an abrupt thud. The sound is based on magnetic field measurements from NASA’s Wind satellite.

The fluctuating energy states of carbon ions in the sun become an ethereal soundscape when given a human voice. In this clip, each energy level is assigned one note sung by a woman. As temperatures on the sun rise and the carbon atoms are stripped of more electrons, the musical chords slide to higher pitches.

While listening to the solar chatter of his transformed data in a coffee shop, Alexander heard a hum with a frequency that matched the sun’s rotation period. He tracked the noise to fluctuating concentrations of carbon ions, which astronomers can use to probe the temperature of the sun’s turbulent atmosphere. He used the same data to compose an ethereal piece in which the increase and decrease of carbon ions modulates the alto voice of his sister.

While Alexander has always been fascinated by the universe, music is his first love. Sound “has been my way of exploring the human condition,” he says. “And now I’m using that creative process to explore the universe at large.”